Oops is right when it comes to my AFL round 8 results 2019. I was hoping to at least match last weeks tipping results, but instead, I slipped back by one. Oh well, shit happens.

In my defense, there were a couple of upsets but I’ll get into that more once I’ve posted the round 8 scores.

I reckon this week’s biggest upset has to be the Fremantle vs Richmond game. The ABC had a good writeup of that and several other matches.

It goes without saying that for me the highlight of the AFL round 8 results 2019 was the Crows winning the last weeks Showdown. According to Fox Sport because of Alex Keath’s brilliant defending he could well be the next All Australian.

Now for some brazen self-promotion. As most of you now know I’m trying to get my  YouTube Channel a boost, so please consider subscribing to my YouTube Channel. You’ll always get a laugh from my Laughaholics jokes. Speaking of which, you’ll love my latest Laughaholics video, Funny Greek Joke. 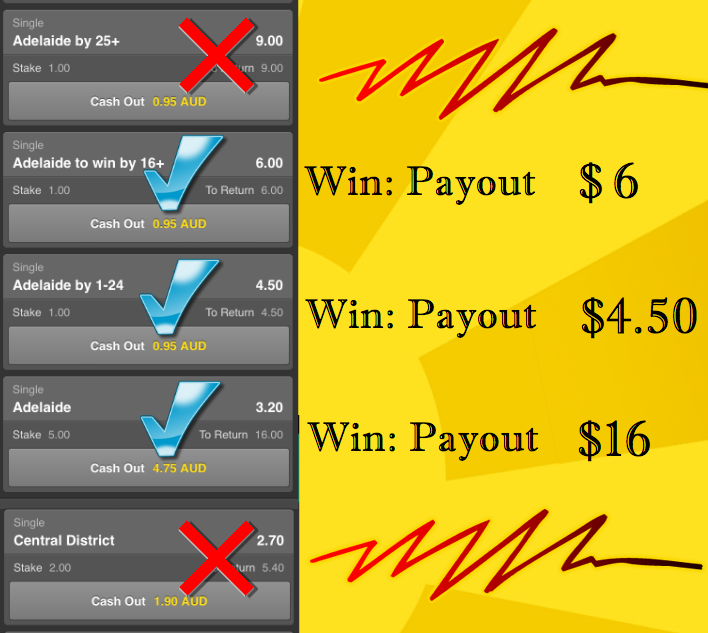 If you remember in my last Bet Of The Week post I put money on a Crows win. Just to make things more interesting I split my bets. As you can see from the image above, if the Crows had scored just two more points I would have gotten 4 out of 4, not including the Central Districts bet. Man, you should have heard me egging the boys on in those last few minutes to try motivate them to get those extra two points. Yeah, as if they could hear me from the lounge room 😀

Check out the AFL site

to get all the match results. Suffice it to say that the Crows finally broke the Showdown drought and put themselves in contention again for a spot in the top eight.

Did I not mention in that last post that there were a few things that was present in this particular Showdown that would motivate a Crows Win!! Man, I love it when I am right.

If you remember, when I first joined bet365 I took them up on their “Up to $200 dollar deposit bonus. I deposited $100 and them matched my deposit. This win has now increased my betting pool to $212.50, even after my previous losses. Sure I could have won a lot more if I put more money on them, but that would have broken one of my important gamble responsibly rules. Only bet what you can afford to lose. This way I can enjoy my sports bets even when my sports bet does not come in.

So, who among you had the balls to back the Crows? Did having placed a bet on a Crows win make the game more exiting for you, as it did for me? Don’t be shy. Leave a comment to tell me how you went for your bet of the week. It doesn’t necessarily have to be on this game. Any sporting event that paid off for you would be fine.

Yep, it’s going to be another Showdown this Sunday and what better game to feature this weeks bet of the week. For those of you who don’t know, every time the Crows play Port Power it’s called a Showdown. I have to admit the Crows haven’t been playing well of late and the Power has. Also the Power have won the last few showdowns But even though it looks bad for the Crows, I’m still putting my money on them.

Showdown Sunday For The Crows

You’re probably wondering what I’m doing backing the Adelaide Crows to win this weeks Showdown. I could say I had a gut feeling, at least I could use indigestion as an excuse when or if they lose. 😀

The fact that David Mackay will not be playing this week, being concussed from last weeks game against Essendon, will make winning that much harder But shit, miracles happen right.

Plus there is the fact that it’s an Adelaide Crows home game, giving us the home advantage. You have to admit, the guys are going to need all the help they can get. You’d hope that they would realise that a loss would almost kill any chance of getting into the top eight as well. Maybe that will be enough to fire them up so they actually win this Showdown.

I know they have it in them to win. They just have to believe in themselves enough to carry them over the line.

As you can see from the image on the right I’ve gone with bet365 for this weeks wager. Not as colourful as the Sportingbet

app but every bit as functional.

Just to make things interesting I decided to split the way I spent my ten bucks this week.

Adelaide by 16+: Just hedging my bets, so in case they win my more than 16 points I’ll win $6. Of course if they get more than 25 points both bets will win.

Adelaide by 1-24: I’m thinking this means I win if they’re win falls into the 1-24 points range. Hopefully they’ll do that so I can see how this works. 😉

The last one. Well, that has nothing to do with the Showdown. You see, I also happen to support Central Districts in the SANFL and I’m hoping they’ll kick the Redlegs ass. 😉

Did you notice the ‘Cash Out’ option that appears at the bottom of each of my bets. I wasn’t sure what the hell that was so I just had to find out. It seems to be special feature for bet365 members.

The Cash Out feature gives you more control over your bets and allows you to take a return before the event has started.

Traditionally, once your bet has been placed you would have to sit back and wait for it to be settled. With our new feature you now have the opportunity to monitor your selections and Cash Out at a point of your choice.

The amount offered will be dependent on how your bet is progressing and could be of a higher or lower value than your original stake. This allows you to take a profit if your bet is doing well, or minimise any potential loss should you think any upcoming selections are unlikely to result in a win.

Cash Out is available on selected pre-match markets on single and multiple bets, for a variety of sports including Australian Rules Football, Soccer, Tennis and Basketball.

How to Cash Out

Bets that are eligible for Cash Out will display in the My Bets section of your Bet Slip – and using Cash Out could not be easier.

Simply place your single or multiple bet, then monitor the My Bets section of your Bet Slip to see the amount being offered to Cash Out early. Should you decide to take this option all you need to do is click on the Cash Out button located beneath your selections.

The amount at which you decide to Cash Out is then fixed, the bet is settled and the final result relating to your bet will have no impact on the amount returned to your account.

Now you now this weeks bet of the week and what the bet365 Cash Out option is all about. Who are you placing your bet on this week?

Oh, before you go, did you see my latest Hot Sport Babes post. It’s sort of AO and NSFW type of post but I kind of like it 🙂