I was lucky enough to score tickets to the Adelaide Crows vs Melbourne game today. I was sitting in the Riverbank stand in Row C. It’s the first time I’ve been to an AFL match at the new Adelaide Oval and it was bloody fantastic. So much better than the old AAMI Stadium. Even the atmosphere as you walk into the stadium was great. So much more atmosphere than I’ve been accustomed to.

The game itself is best described by the Age who called it an Ugly Dirty AFL Match! Even though the stats show that the Crows had more frees, 21 – 15, I reckon they could have easily got way more than that. Those damn umpires just seemed to ignore so many instances that should have resulted in frees.

I didn’t place a bet on any of the games this week because the odds on the games that I was interested in were pretty dismal. I’m not going to bet on anything just for the sake of it either because that doesn’t fit into my responsible gambling regime. I certainly wasn’t going to bet on the Crows as their odd was a low 1.08. I have to admit though that over half way through that first quarter I was wishing that I backed Melbourne whose odds were around 7.50. Luckily they came good shortly after.

As you can see from the image above it wasn’t until the third quarter that Adelaide started to pull away from Melbourne.

I have to admit it’s a lot more exiting to watch and AFL match live than watching it on the TV. not just for the general atmosphere either. Some of the colourful comments coming from the spectators are quite amusing. One has to wonder how many of the umpires ears were burning from all the names they were being called. Even the poor weather wasn’t enough to dampen the excitement. Lucky for me we came prepared and had our plastic ponchos

handy. Not like those guys behind us that were waiting for the ‘poncho salesman’ to come around.  :tongue_out:

I took a few photos with my iPhone, and while they looked good when previewing it through the phone in reality the image was pretty poor. The poor lighting didn’t help much. Of the photos I liked this one of Eddie Betts the best. 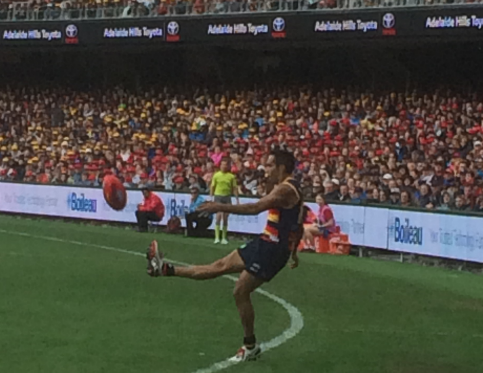 As you can see Eddie put a lot of effort into that kick but unfortunately that particular one resulted in a behind. Check out how his leg curves past the knee. Almost looks painful doesn’t it?

Even though I expected the Crows to slaughter Melbourne I’m happy that they won. That’s three in a row,

Next week they’ll be playing the Western Bulldogs and I reckon they’re going to find them a little harder to beat.