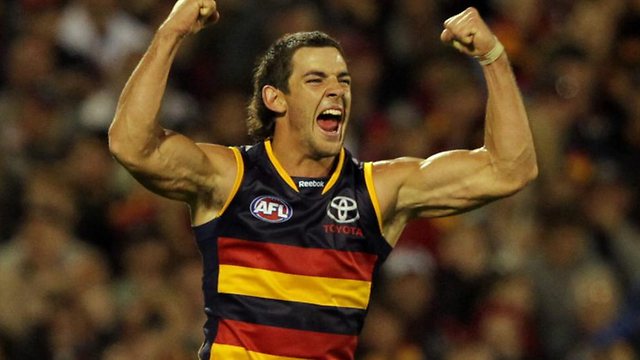 It seems that one of the first things that Phil Walsh has done since becoming the Crows coach is to make Taylor Walker the new Captain. Now, I like Walker but I’m not sure that making him captain over Patrick Dangerfield is the right move. I’m pretty sure that Patrick, and a lot of the other players, thought that Patrick would be the one to captain the Crows in 2015.

I don’t think that anyone would disagree with the fact that Dangerfield is an important player and that he would be sorely missed. Considering that his contract comes up at the end of the year one would have thought that perhaps making him captain instead of Taylor Walker would get him to commit himself to the Crows. But then maybe the fact that he’s not prepared to commit himself is the very reason that Phil Walsh decided to to crown Taylor Walker as captain.

One only hopes that Patrick Dangerfield is professional enough not to let the decision affect his game this season. I don’t think that Patrick is the sort to let this affect his football. I’m sure he will do the right thing by the Crows and that he and the rest of the team will work well under Taylor Walker.

I still wonder why Phil Walsh decided on Taylor Walker to captain the Crows. After reading the article in The Age I got the impression that Walsh chose him because he was a country boy and that would make a great story.

“This is a great story … a boy from Broken Hill now the captain of the Adelaide footy club. He always puts team first and he consistently meets elite standards, but most importantly, Tex influences others to follow him in the direction I want this club to go. He’s a competitor who desperately chases success – all qualities I want from every Crows player when they put the jumper on this year.

“It is a lot harder for country guys, so I like these sort of stories. One thing I love about playing in the country … the whole town would travel to watch you play footy. It’s a bit like a village brings a boy up, and I think we have lost a little bit of that as a society.

“I love the story, Broken Hill lad identified by Mark Ross at a carnival, came down here, took a while to adjust and now he is the leader of the footy club. The message for any young boys out there is to believe in your dream and chase it as hard as you can because you might up one day end up like Taylor Walker.”

So, part PR and part country boy’s will to succeed pulling the rest of the players to victory. Shit. as a Crows supporter I certainly hope this is the case.

What do you guys think? Do you think that Taylor Walker will make a great captain? Will the players follow his lead or would you have preferred that the captaincy was given to Patrick Dangerfield?