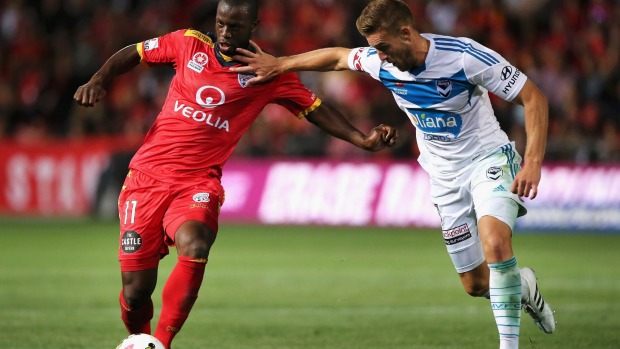 You know I really should listen to Fortuna, our Lady Luck of sports. Even though she warned me against betting on the Adelaide United vs Melbourne Victory game I went against her advice and laid a bet. I thought that by covering my bets I thought for sure that would secure me a win. Reading that post will explain exactly how I placed my wagers on that game.

As it turns out the Adelaide United vs Melbourne Victory match resulted in a 2-2 tie. What a pain in the ass because that turned what I thought was a winning bet into a losing bet.

One thing for sure though was it was one hell of an exciting game. As much as I wanted Adelaide United to win, right near the end there I was hoping someone would score a goal. Shit, I didn’t even care if it was Melbourne Victory that scored the goal. What’s that? I’m not being a loyal fan? Heck, before I used to bet on soccer games I never even used to watch them. It’s not like it’s the AFL and I was hoping the Crows would lose or anything.  :tongue_out:

As you know whenever Adelaide United vs Melbourne Victory Results it always results in an exciting game. This one was no different. As far as I’m concerned Adelaide was the better team. They controlled the game most of the time and really should have converted more but that wasn’t to be. I’m not sure of the exact number but I reckon Adelaide United had at least 16 corners. One would have thought they should have converted some of them into goals but that wasn’t to be.

My goal of the match goes to Pablo Sanchez. As you can see from the video below the gameplay resulted in Sanchez securing a perfectly executed header that resulted in a goal. Even though the video shows the goal and resulting aftermath that caused a lot of Adelaide supporters, my son being one of them, to be showered in a beer bath. Personally I thought it a waste of good beer but whatever turns you on, right? 😉

What the video doesn’t show is the gameplay after the ball was thrown in until Sergio Cirio was able to chip a cross to the back post where Sanchez literally soared above Victory centre back Matthieu Delpierre to nod home the equaliser from close range. Read a full run down from the A Leagues official website.

Did you watch the game on Foxtel or were you lucky enough to be physically there. Either way, what did you think of the latest Adelaide United vs Melbourne Victory clash?