Finally we have the perfect AFL tipping result for the 2017 season. :drunk: Yeah, I know there were only two teams playing, but then, a win is a win right? :thumb_up: 😎

I know I am a Crows fan and so people are going to say my opinions on the game is a little biased, but that was a fantastic game. Sure it wasn’t as exiting as the Port Power vs West Coast game in the first week of the finals, I think I called it a cracker of a game, but it was exciting football all the same. Even the Crows lead in every quarter one can’t deny the Cats commitment to the game. They threw everything they had at the Crows but they just were not able to overcome the Crows thirst for a win.

For me the best part of that game was the Sloane / Dangerfield Clash which one site called The Clash Of The Titans. 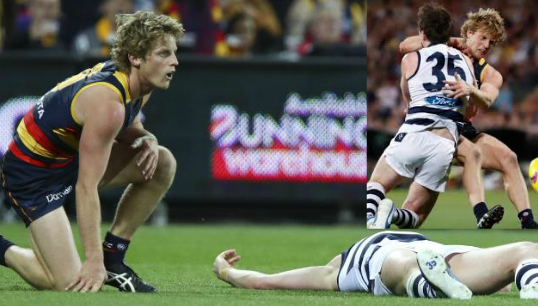 While I admit it was poor form for the Crows to boo Dangerfield as he was taken off the field you have to allow for all that adrenaline pumping through their veins in the moment.

I said right at the beginning that it was going to be a Richmond vs Crows grand final. I even went so far as to put my money on it as you can see from this post. Well, I was right and that turned into another winning bet.

As you can see it was pretty close up to half time but it was downhill for GWS from then on. It was as if they had nothing left after the break and couldn’t do a thing to stop the Tigers from flattening them.

Stay tuned for Finals Tipping Post, but until then maybe you should check out my Women’s Sport Sexy Moments post.