There is only two weeks of footy left! Can you believe that? Shit, I don’t know what I’m going to do with myself once the footy is over. Probably write some more Hot Sports babes posts I reckon. Before I get to the AFL 2017 Preliminary Finals Tips you may want to check the AFL finals week 2 results.

Before we get to tipping, and in defense of Fortuna’s tipping results for the 2017 season I would like you all to read the ABC News article which basically states that tipping is a waste of time. If you’re a regular you would have noticed how I’ve mentioned more than once this season that there have been heaps more upsets this year. Lets hope that as far as finals footy tipping is concerned that the remaining games are real nail biters. 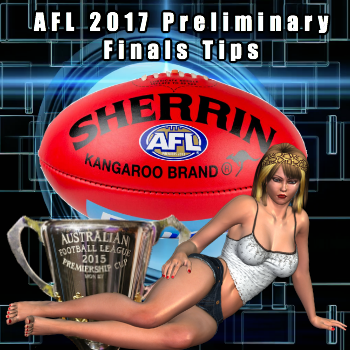 OK, now that I’ve got that out of the way lets have a loot at Fortuna’s AFL 2017 Preliminary Finals Tips.

I said in my last post that it was going to be a Crows vs Tigers Grand Final and it looks like Fortuna agrees with me. Of course that doesn’t mean jack shit because when it comes to tipping, or betting, you never really know what the results are going to be.

While you don’t mind too much getting your tips wrong you sure as heck don’t want to be continually losing your sports bets. This is why gambling responsibly is so important.

Speaking of bets I think now is a great time to see which of out favourite online sports betting sites are offering the best odds. Of course you all know that unlike other sites I actually place bets on those games I write about. You also know that my favourite  betting sites are sites, Sportsbet, William Hill and Bet365.

So, lets see who got the best Preliminary finals odds shall we?

Well, it looks like the punters have the same idea as far as their betting goes as they’re backing Adelaide and Richmond. For this weeks bet I’ve decided to do a multi-bet with Sportsbet. You can see proof of that bet here.

Over to you guys, who do you think will be triumphant in the AFL 2017 Preliminary Finals?