I wasn’t going to post a bet of the week this week because I couldn’t really find a sport that I wanted to place a bet on. The World Cup is over, I’m not really into darts so the World Matchplay 2014 was out. The Adelaide Crows are having a bye this week so I wasn’t really thinking about placing a bet on the AFL. That was until I saw the odds on the AFL clash between Melbourne and Port Power.

AFL Clash Bet Of The Week Because Of Great Odds 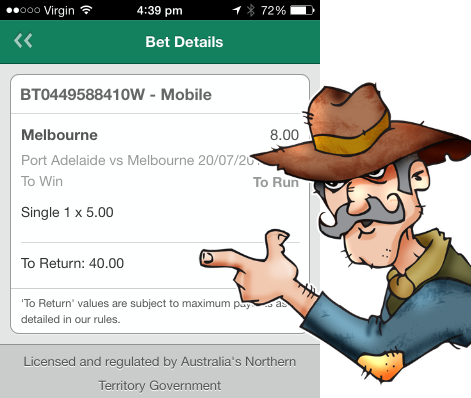 the Vics or some other Interstate teams I want the Power to win because I support South Australian teams. This is in stark contrast to the greater majority of Port Power supporters who for some reason always want the Crows to lose when playing other teams.

Anyway, while checking the odds of the different AFL games on my bet365 app I noticed some killer odds on the the AFL clash between Melbourne and Port Power.Check out the odd in the image over to the right.

You’ll notice the 8.00 odds for Melbourne which is why I backed them. You’ll will also know that I only placed a $5 wager. That’s because I’m not completely bonkers. I don’t think that Melbourne have a hope in hell winning that particular AFL clash. But then you never know. Upsets do happen.

Isn’t it funny that ever since the last Showdown where the Crows, agains’t all odds I might add, beat the Power, Port just haven’t been able to win a game. People said I was crazy to back the Crows but I did and I won the bet.

Who knows, maybe they still haven’t got their act together. Maybe Melbourne will be able create another AFL miracle. All I know is that this time I want the Power to lose and it looks like even though the Crows aren’t playing I have a AFL game to watch this weekend.

In case you want to know why I’m not backing Port Power its because of their really crappy odds of 1.08. Just checked my bet365 app again and Melbourne is now 11.00 and Power 1.05. Shit!! I wish I had placed my bet today 😀

For all you Port Power supporters I did manage to find this really cool video that I think you will enjoy. It’s I Love The Power by Nova 919’s Dylan Lewis.

A Bet On Crows To Win