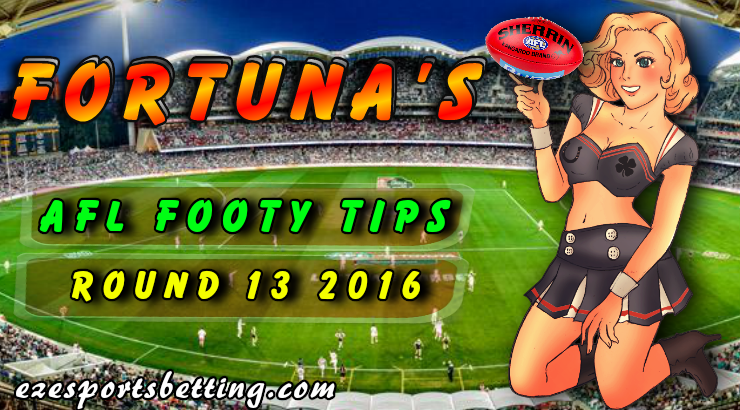 With the bye week starting this week we can only hope that Fortuna does better than her dismal one last week. I was asking around at work and the best anyone did was 7 out of 9. A lot better than Fortuna’s 4!  :pull_hair: Still, this is a new week and I’m not at all upset with last week, especially as the Crows won and my sports betting bankroll is still in the positive so I have been winning more than I’ve been losing. Anyway, lets have a look at Fortuna’s AFL Footy Tips Round 13 2016.

According to Fortuna, apart from the Essendon vs GWS Giants game, this week is going to be one of those weeks where almost anyone could win.

Take the Nth Melbourne vs Hawthorne game. By all rights that game should go to the Roos, Etihad being their home ground and considering the fact they’ve played well enough to still be on top of the ladder. Still, the AFL being what it is the Hawks could easily snatch the win. Fortuna has gone for the Hawks.

Now that I have Fortuna’s AFL Footy Tips round 13 it’s time to check who has the best AFL odds.

I’ve decided to forgo the Multi_bet this week and to place my money on Port Power. As William Hill has the best odds for that game I’ve decided to go with them.

Naturally I’m not going to miss out on my chance of winning $10,000 so I made sure I entered the SportsBet Million Dollar Tipping competition. Now, it’s just a matter of sitting back and see how Fortuna’s AFL Footy Tips round 13 pans out.