In my post last week about getting the best odds I spoke about how the earlier you placed your bet the better the odds. In my experience this is normally the case. You may well remember my post where I spoke about the Port Power and Crows Rivalry and why I placed a bet on Port Power to win the game against Fremantle. I placed that bet hoping it would put a hex on the Power causing them to lose. Unfortunately they won. On the plus side I did win the bet.  :tongue_out:

Not to be deterred I backed Port Power against Hawthorne in last weeks game. Finally the hex cut in causing Port Power to lose. Even though I lost the bet I, as a Crows fan, came out a winner.

Placing A Winning Bet On The AFL Grand Final 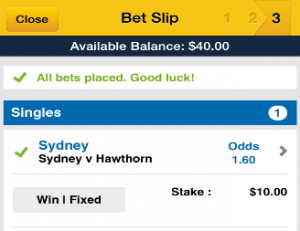 Getting on with the job about placing a winning bet on the AFL Grand Final I should have followed my own advice and placed the bet last week. Last week the odds for Sydney to win was $2.20. Today when I placed the bet with Sportsbet it was only $1.60. I figured after voting their app the best sports betting app I may as well take it through to actual completion. All I can say is that I loved it. These sports betting apps make placing a bet online so simple. The Sportsbet app was that little bit better than the other to.

Of course I’m hoping that this time around I’m not putting a hex on Sydney and that Lady Luck will be smiling on us and that Sydney does win the AFL Grand Final. As I’ve always said though, when it comes to picking the winner there is no sure bet. The only time you can be assured a win is if the game is fixed. We sure as hell don’t want that crap happening around here.  :thumb_down:

Even though Sydney are favourites in the AFL Final, Hawthorne could very well pull off a win. That will make all those punters backing Hawthorne really happy. Yep, really happy considering the $2.40 odds. Odds that only dropped 5 cents from last week.

Who do you think will win the 2015 AFL Grand Final?