Yep the finals are finally here and it’s between the Hawks and West Coast! The good thing about the AFL finals is it doesn’t really matter who’s in the Finals! Even if your team has been knocked off AFL Finals fever is still infecting thousands of AFL fans.

Naturally the big question is who is going to win the 2015 Grand Final. Will it be Hawthorn, the obvious favourites. Or will West Coast be able to dig deep and find the courage needed to topple to reigning back to back champions. Personally I want West Coast to win. Partly because I like West Coast but mainly because I reckon it’s great when the Vics lose.  :devil:

Dunno if there’s any point in Asking Fortuna but I reckon she’d be pissed if I passed her over for this post. 😉 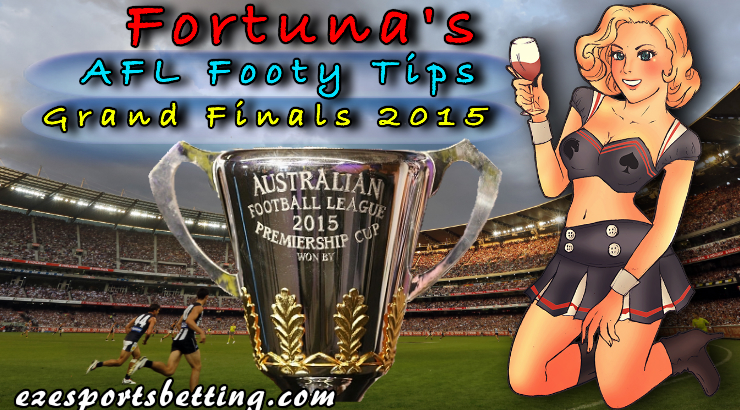 You may have noticed that the one constant, apart from Fortuna herself, in the above image is the AFL Grand Finals Cup. It’s that cup and the prestige of winning itself which spurs the Grand Finals contenders on. OK Fortuna, lay it on us! Who do you think is going to win this years grand final?

Can you believe that? Fortuna’s taken the safe road again! Can’t blame her though because it’s worked for her in the past. Oh well, reckon it’s time to check out the odds to see which online sports site is offering the best odds.

I’m going to take Fortuna’s advice and I’m going to back the Hawks. Not only that but because my bank roll has been growing of late I’m going all out and placing twenty bucks on them using Sportsbet. The reason I’m going with Sportsbet is because of their special offer! Basically, even if Hawthorn loses,they will refund my money, up to $100, as long as my team is leading in one of the four quarters. Shit, if the Hawks can’t do at least that they don’t deserve to be in a Grand Final.

You can see my bet here. So, who are you placing your money on in this weeks AFL grand finals?