How many folk out there were surprised by last weeks fight for the 2016 AFL Finals results? The only one that really surprised me was that the Doggies beat the Hawks. I’m sure no-one was more surprised than  the Hawks?

As for the Sydney vs Adelaide game, as much as I wanted the Crows to win the Swans were just to good for them. It wouldn’t have been so bad if the Crows had put up a half decent fight but one quarter of finals football just isn’t good enough.

Of the two matches I reckon the Bulldogs vs Hawthorn one was the most exciting. That is what football finals is all about. I’m sad to say that the Crows effort was just not finals material.

As for the betting, if you read my last post you would know that I lucked out on both games.

Talking about a really hot post, you should definitely check out my Kiira Korbi Hot Sports Babe post. :drunk: 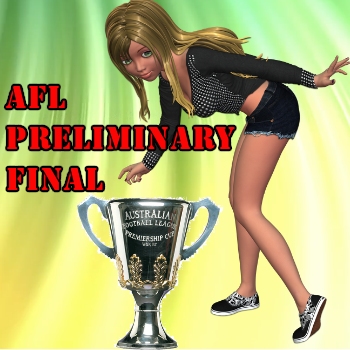 Enough of last weeks footy, now it’s time to look forward and see what Fortuna has in store for us. It’s time to check out Fortuna’s AFL Preliminary Finals 2016 Tips

Once again Fortuna would like to stress to everybody that betting on finals footy should always be done responsibly. Unless you can afford to lose the bet don’t bet at all. Finals or not you should never bet more than you can lose.

Naturally, before anyone can place a bet on this weeks AFL Preliminary Finals tips we need to check out who has the best odds.

Now that I have the best odds I’ve decided to back the Western Bulldogs with Sportsbet. This is partly because they’re offering great odd but mainly because of their cashback offer. This is their AFL finals cashback offer where you get your money back, up to $50, if you team loses my 18 points or less.

Sure, that hasn’t paid off for me yet because the losses have all been more than that, but I reckon I have to be lucky once, right. :pull_hair:  😉

Anyway, I reckon the Doggies have what it takes to pull it off. Especially after putting the Hawks away.

As always, you can see proof of my wager by clicking here.