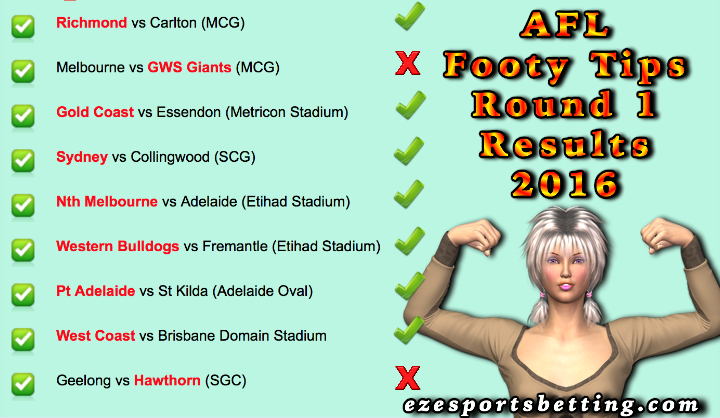 You got to hand it to Fortuna, she did pretty well with the AFL Results round 1 2016! Unfortunately for me I picked the two losers in my Sportsbet multi-bet. If the Hawks won like they were supposed to I would have got my money back.

Who the heck would have thought that Geelong would beat Hawthorn? I’m sure some Geelong fans would have backed their team and at 2.25 odds, if you used William Hill, they would have done pretty well. Patrick Dangerfield was pretty bloody amazing. Just about everyone including theRoar were pretty awestruck with Dangerfield’s performance. Perhaps if he was back at the Crows both the Hawks and the Crows would have won.  :tongue_out:

As for the Crows vs Nth Melbourne game, was that a full on game or what. The AFC reckon that part of the reason for the Nth Melbourne win was their home ground advantage. While that may have helped a little other factors would include the loss of Dangerfield and their new rookie coach, Don Pyke.

All that aside, I think their biggest failing was their loss of control.Some of the players let their temper cloud their actions causing ball turnarounds, 50 metre penalties as well as costing us a shot at goals. It’s quite possible that their lack of discipline cost them the match! Especially when you consider they only lost the game by 10 points!

Perhaps Fortuna had an inkling about their lack of discipline when choosing her tips otherwise her AFL Results round 1 2016 would have a few more losses.

On the bright side, even though I lost my Multi-Bet it wasn’t a total loss. Because I got 3 out of the 5 leg MultiBet right I got $4.33 out of the $10 bet back. That’s better than losing the whole tenner right? It makes my sports betting bankroll last that much longer. 😉