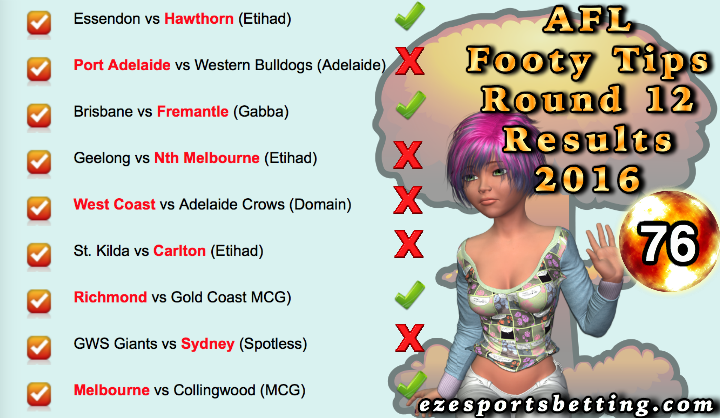 Talk about getting it wrong! Fortuna’s AFL Round 12 results 2016 would have to be one of her worst results ever! The Port Adelaide vs Western Bulldogs game could have gone either way. There are some who will say that the dogs were always going to win that game even though most punters would have disagreed. Personally I was hoping for rain as I thought that would have tipped it in the Powers favour. Unfortunately the heavens didn’t release any rain on the game and the Power lost by 3!

As for the Geelong vs Nth Melbourne clash, it seems that the Fortuna just didn’t allow for the Dangerfield factor! Perhaps I should have gone with the favourites and gone with Geelong for that leg of my multi-bet but I didn’t and that was two legs that I got wrong screwing up any chance of getting my cash back offer.

Truth be told, this was probably my worst ever multi-bet result, getting 4 out of the 5 legs wrong. Still that one leg returned 73c which means I only lost $9.27. Oh well at least I can put that 73c towards my next bet  :thinkin:

On the plus side the Crows played a ripper game against West Coast coming up from behind to win by 29 points. Yeah, I know I tipped against them but then so did a lot of others, especially as they were playing at the Domain! I have to admit though that was one tip that I didn’t mind getting wrong, especially as my multi-bet was shot anyway.

That and the fact that Port Power lost resulted in the Crows going to the seventh spot on the ladder and Port Power being kept out of the 8.

That poor AFL Round 12 Results 2016 brings Fortuna’s running total to 76. It could be a lot better but then it’s still probably better than a lot of punters out there.

So, tell me, how are you AFL footy tips holding up? Feel free to leave a comment.