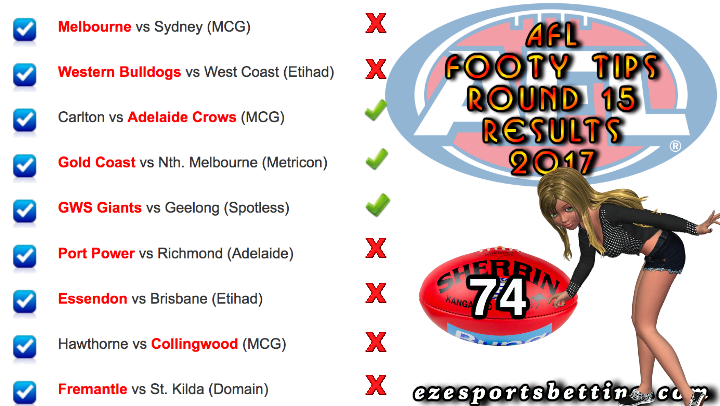 If you read the round 15 tips post you’ll notice that I place two bets, one with Bet365 and the other with William Hill. The reason for that was so I could get the best odds. On of the positives of joining more than one online betting site. The first bet was on the Melbourne vs Sydney game. I really expected Melbourne to win. The ABC called it a surprisingly good win for Sydney. Sydney is now one game out of the eight.

Round 15 Controversy: The most controversial event of round 15 would have to be Bugg letting one go at Mills four minutes into the game ending the rest of Mills’ game. This put Sydney down a man and one wonders if in a situation such as that the offending player should also sit out the rest of the game. Certainly would make them think twice before lashing out in such a fashion.

The other bet was on the Gold Coast vs Nth. Melbourne game. Luckily that was a win for me. With one win and one loss for the week I’m down 75 cents. All in all I’m pretty happy with that.

Apart from the my win the other highlight of round 15 would have to be the Crows beating Carlton. Port’s loss put a two game buffer between the two teams. Hopefully the Crows can keep ahead of the Power, I would have to fall behind our dreaded foes.

For the best rundown of the round 15 games I don’t think you can go past the Roars’ article.