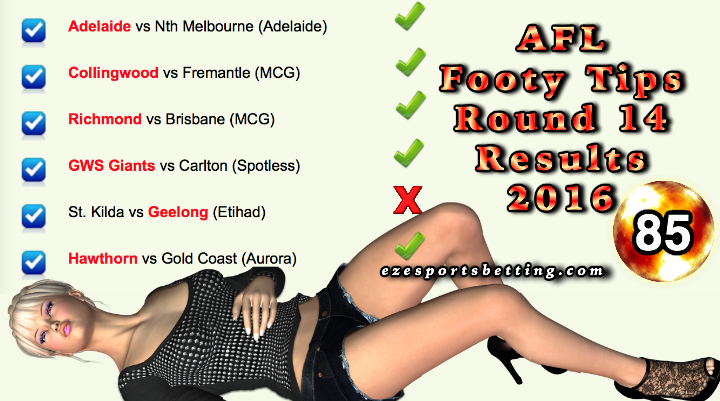 Yep Fortuna improved on her previous weeks result getting only one wrong in her AFL Round 14 Results 2016. That brings her total for this week to 85.

Unfortunately for me the Geelong loss cost me my Multi-Bet with William Hill. I could have cashed out but even 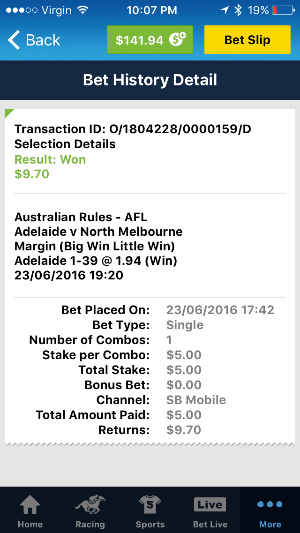 minutes before the siren sounded I was sure that Geelong would kick the final goal that would win them the game and me the bet. Unfortunately it wasn’t to be.

As the Age reports even Dangerfield wasn’t enough to get them the win. I say the loss was due to the Cats thinking they had an easy win over the Saints.

I reckon the Cats coach gave them a spray but it wasn’t until the third quarter that they made any sort of comeback. In the fourth quarter it was anyone’s game and that did make for an exiting last quarter. Like I said at the beginning of the post I really though they would take the lead but it wasn’t to be. I should have cashed out when I had the chance. :bash:
Still, it wasn’t a total loss because after last weeks post went live I decided at the last minute to place a bet on the Crows game.
You can see the results of that Sportsbet bet over there on the right. I wasn’t going to place a bet on that game because the odds were pretty bad. Then I say an add about the  Sportsbet margin bet. This was where you bet on the margin of the the winning bet. As you can see I decided on the Crows winning by up to 39 points. As it turns out the Crows won by 33!
How close was that? That was one of the few games where I was virtually willing the Crows not to kick any more goals. For me that’s what placing a small wager on a game is all about, making the game more exciting. That $5 wager added another $9.70 to my sports betting bankroll! That’s almost a 100% windfall! In essence last week was virtually a winning and a losing bet 😉