All I can say was those AFL round 14 results 2017, while not perfect, were better that what we were getting during those bye weeks. It’s almost as if the bye weeks put a curse on the AFL results. So, how did Fortuna go with her AFL Round 14 Results 2017? Let’s have a look shall we. 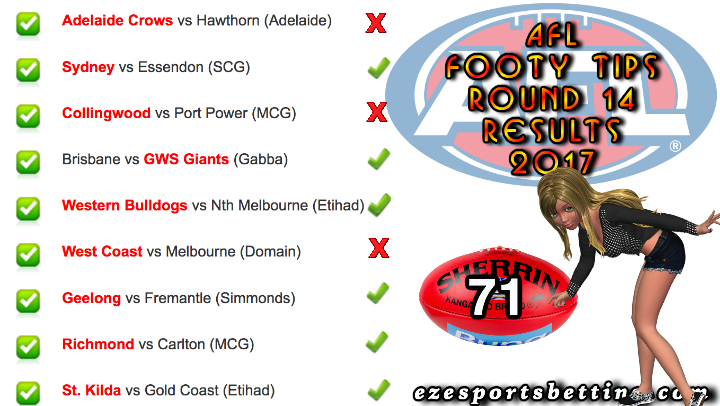 As you can see Fortuna got 6 of her 9 tips right. If you check my bets in last weeks post you’ll notice that I was actually able to use those tips to get all my bets with Bet365 right. It’s moments like this when I think I should have placed a mult-bet, but then I’m sure if I did that Murphy’s law would have cut in and I would have a losing bet instead of a winning bet.

What was particularly upsetting about the AFL round 14 2017 results was the Adelaide Crows vs Hawthorn game. Luckily the odds were so much in the Crows favour that it wasn’t worth betting on.

Shit, how in hell did the Crows who were on top of the ladder lose to the Hawks who were second to last? Was it because the Crows went in without all guns firing because they thought the Hawks would be an easy win? We all know what a fatal mistake that can be.

Add to that the fact that the Crows played and home and so had the home advantage makes the loss even more bewildering.

Coach Don Pyke says “We never really got into gear.” Hello, we can see that! What fans can’t understand is why the Crows couldn’t get it into gear. As the game progressed everyone could see that unless the Crows pulled their fingers out their hold on the game was tenuous at best.

Also, they have to do something about Sloane. Having one man tagged during a game should never result in a loss. Something has to be done to counteract the Rory Sloane effect.

Come  on Crows! Your fans want and deserve better.