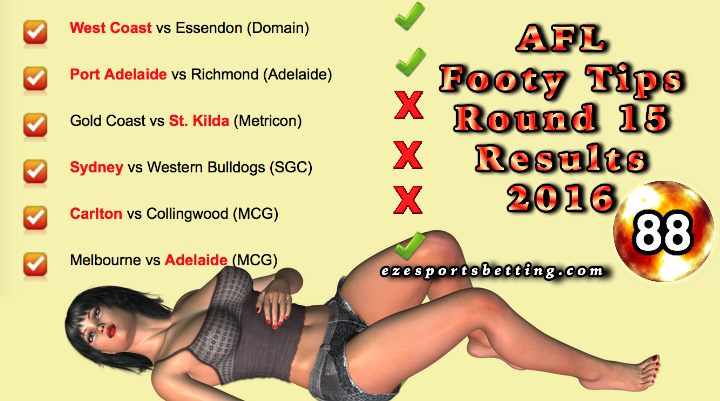 All I can say is last weeks bye week was the week from hell as far as AFL tipping goes. I can’t blame Fortuna for being pissed after getting results like that! You can see the AFL Round 15 results 2016 in the image above. You’ll also notice that Fortuna’s running total for this week is 88. I was really hoping to hit over 90 this week. Unfortunately it wasn’t to be.

As far as I’m concerned the biggest upset of the week was definitely the Sydney vs Western Bulldogs game. I’m sure that the Dogs were pretty thrilled with their win and that Sydney was pretty pissed about losing a game that they should have won. I found this article from the Doggies site pretty interesting. They’ve copied portions from different media that commented on their win over the Swans.

On the plus side it was great to see the Crows get another win under their belt. Sure it was a pretty scrappy game, even Tex was the first one to say that, but a win is a win and it now puts them 5th on the ladder.

Still waiting to win something on Sportsbet’s Million Dollar Tipping competition. At least now that I’m also tipping on the NRL I’ve doubled my chances of getting my hand on that $10,000!  :tongue_out: Last week I tipped 6n out of 8 again. That’s two weeks in a row that I only got 2 wrong. Not too shabby considering I know stuff all about the NRL! 😉

Things are starting to get really interesting now. Especially since the top 7 teams are separated by just a single win. More than interesting, it makes those future games that much more exciting.

Oh well, now that we have  the AFL Round 15 Results 2016 out of the way we can concentrate on this weeks footy tips which you will see in my newt post.

TomWaterHouse Can Have The Best Odds