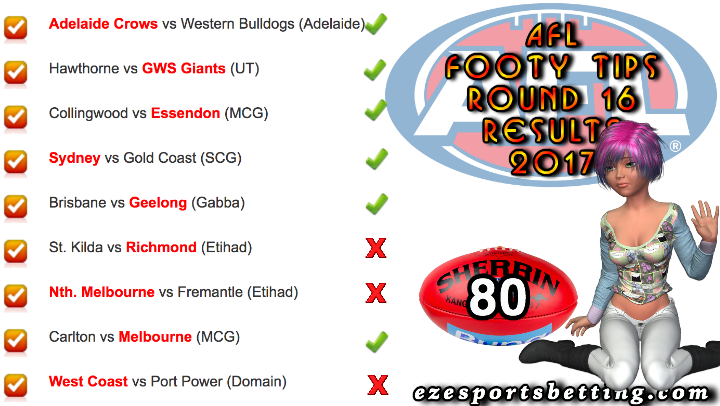 As you can see things started off really well. Fortuna got the first 5 of her AFL tips right. The first one she got wrong was the St. Kilda vs Richmond game. I’m sure a lot of tipsters would have tipped the Tigers to win that game. Who would have thought that the Saints would blow them out of the water with a resounding 67 point win! According to FoxSports it was all due to Alan Richardson’s ‘coaching masterstroke.’

There’s no doubt in my mind though that the Saints deserved that win. They went all out and played a solid four quarters of footy.

Then there was the North Melbourne vs Fremantle game. That game was always up in the air as far as tipping goes. The fact that Freo won just shows they threw themselves into the game more. North Melbourne’s problem was they let them get too far ahead earlier on in the game. So much so they couldn’t peg them back and lost by only 4 points. Best write up on this game, The Roar.

Finally, the last woeful tip belonged to the West Coast vs Port Power game. I really thought West Coast would win this game but it wasn’t to be. The Power flipped the switch on in the last quarter and stormed in as resounding winners. AFL.com reckons there are important talking points about that game.

Unfortunately getting three wrong isn’t enough to win Sportsbet’s Million Dollar Tipping. According to Sportsbet ‘FIVE superstars managed to nail the perfect round, picking all 9 winners and landing bang on the margin. That means they share the $5000 prize. I reckon $1000 isn’t a bad reward for getting all your tips right in AFL round 16 2017 results.

As for me, once again I got one bet right and one wrong, as you can see in last weeks post.