There was a slight improvement with this weeks AFL Round 17 2017 Results as Fortuna tipped 7 out of the nine. That’s one better than the round 16 results but still 2 short of a perfect score. This brings Fortuna’s running total for round 17 to 87. How does that compare to your tipping results?

Before discussing the AFL Round 17 2017 Results let’s see exactly how Fortuna went. 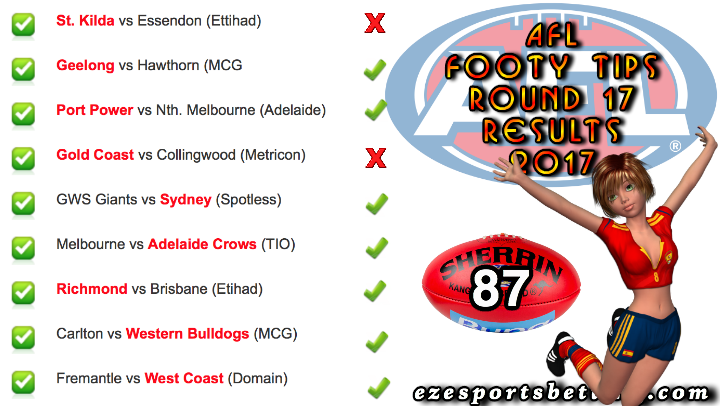 Unfortunately for me Fortuna stuffed up on the very first game, St. Kilda vs Essendon. This was particularly disappointing because it was the first leg of my Sportsbet multi! As it turns out Sportsbet must have ended their promotion where they would refund your money on 4+ multi’s as it was the only leg I got wrong and there was no refund. My fault for not checking to see if that promotion was still running. Oh well, shit happens.

Who would have though that Essendon would have won this game, especially after St. Kildas previous performance against Richmond. You can check out the full match coverage and results here.

Fortuna’s other stuff up was the Gold Coast vs Collingwood game. According to Foxsports the Magpies did it all for Buckley. That’s a really nice thought but I personally feel they were just lucky. Why wait all that time before finally performing for their coach. If they really had any respect for Buckley they should have been playing real footy a lot sooner than the round 17 match.

Still, I will accept any improvement in Fortuna’s footy tipping. I’m still hoping she will pull out a perfect score soon.

Another great positive to the AFL round 17 2017 results is the Crows win against Melbourne. That win puts them at top of the ladder but they’re hanging on by the skin of the teeth. They need some really good wins to secure that spot. Go the Crows.

Fickle Lady Luck Gets It Wrong