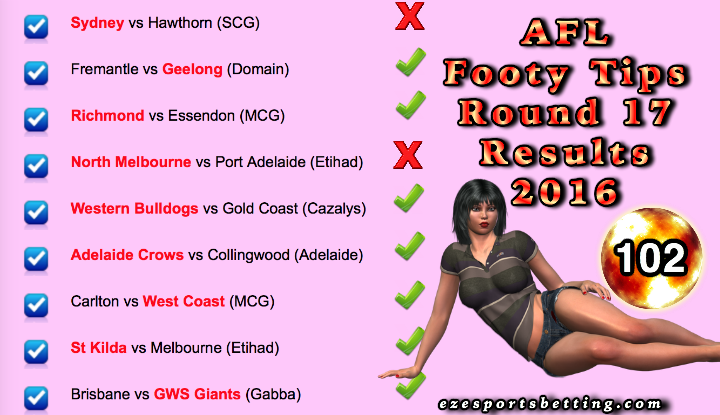 As you can see from the image above Fortuna’s AFL Round 17 results were pretty good. Once again Fortuna’s scored 7 out of 9 for her AFL round 17 results. This brings her total for the season to 102!

Of the two she got wrong I reckon I can safely say that they were both upsets. If you read my last post you would have noticed that I backed Sydney to win. Luckily for me I used Sportsbet to place that bet and because they led in at least one quarter they refunded my money. You’ll also noticed from that post that I used the refund to place another bet on St Kilda to win. Which they did which made last week a winning bet.  :drunk:

The News had an interesting article that you may be interested in. Especially the part where the Giants Chairman, Tony Sheperd was clapping a Sydney Goal!

The other upset for me was the Port Power vs Nth Melbourne game. Looking at the odds I reckon a lot of punters didn’t think Port Adelaide would win. But win they did as this article shows. In hindsight, the once leading Nth Melbourne has since lost consecutive games making them look like an AFL basket case. Perhaps it wasn’t so surprising that Port Power actually won.

Another highlight for the week was the Crows win against Collingwood. A win which has placed them at number 2 on the ladder. Who would have ever though the Crows would have gotten so far, especially after losing Patrick Dangerfield. But then, perhaps it was his loss which has brought them all together to play as a team. I found this article on the Crows to be pretty inspiring.

Looking at the next few games it looks like the Crows have a pretty good run. A run that should cement them in the top four coming up to the finals.