Man, I was so looking forward to a great week of AFL tipping. As you can see below, the AFL round 18 2017 results started off OK until the Melbourne vs Port Power game. 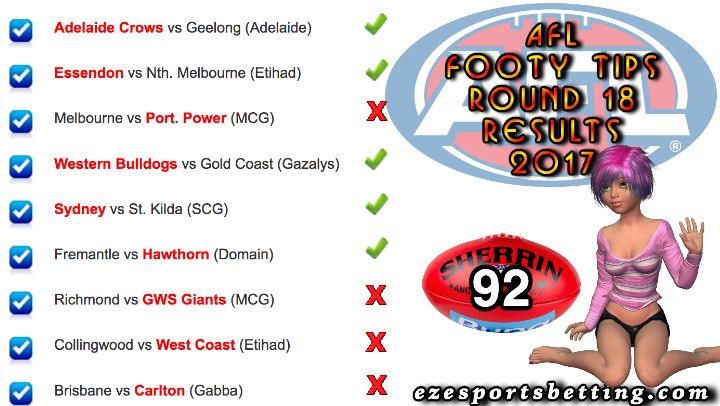 Trust Port Power to be the first one to screw things up for us. That was definitely a game they should have won but unfortunately they were asleep the first half. It wasn’t until the second half that someone decided to flip the switch to turn the power on, but by then it was way too bloody late.

As you can see from this article it was all about the Demons! The Power hardly got a mention until nearly the end of the article, but then when you play like shit, that’s all you deserve.

At least the Crows played like this was the win they had to have. They’ve finally broken the 14 year old hoodoo I spoke about in a previous post. Pyke spoke about the fierce contest but I’m sure everyone who watched that match saw how brilliantly the Crows stood up against the Cats! The Cats threw everything at them and were always in their faces but the Crows finally stood up the them and gave better than what they got.

And what about Sloane? Was he a bloody marvel or what? Lets hope he can keep it up.

Too bad we will lose Betts in the Collingwood clash due to having his appendix removed but fingers crossed that he will be back in the next Showdown.

See what the Roar had to say about the Richmond vs GWS Giants game. They figured it was going to be a close game and that Richmond should win. Looks like they were right.

The Collingwood vs West Coast was always going to be a close game, but it was still one that I thought West Coast could win. Unfortunately it wasn’t to be. Check out what Nine WWOS thought of that game.

As for the Carlton and Brisbane game? Read how Brisbane managed to hold off the late Carlton comeback?

The AFL round 18 2017 results just goes to show why teams have to play four quarters of footy if they expect to play finals.

As far as the betting goes, you’ll notice from my last post that the Sportsbet wager turned out to be a winner whereas the William Hill one didn’t.