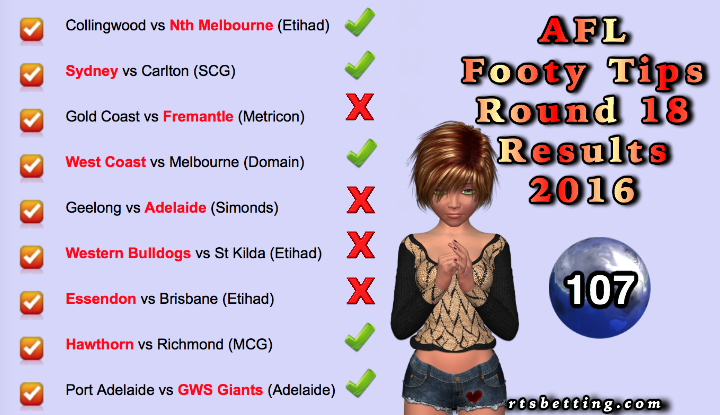 Man, what a shocker Fortuna’s AFL Round 18 results turned out to be. I reckon Fortuna will be praying for a better result next week so as not to tarnish her reputation 😉

Out of all the AFL round 18 results the only one that I found to be really disappointing is the, yes, you guessed it, the Adelaide vs Geelong game. Like I mentioned in my last post, even though Adelaide hasn’t won at Simonds since 2003 I really thought they had it in them to win that match. Alas, it wasn’t to be.

Even though the Adelaide Crows weren’t the punters favourite I really thought they had a good chance of winning. At the very least I thought they would win at least one quarter. Had they done that Sportsbet would have refunded my bet. Unfortunately the boys couldn’t even do that for me.  :bash: The Herald Sun did a nice writeup of the Adelaide vs Geelong game.

Had Adelaide won that game, or even led in one quarter, I would have placed a bet on another match. But they didn’t and so neither did I. That’s what responsible gambling is all about.

Oh well, aint no point in crying over spilt milk, or in this situation a losing bet  😎  There’s always the next sports bet and round 19 to look forward to. Lets hope Fortuna does better in her round 19 AFL Footy tips.