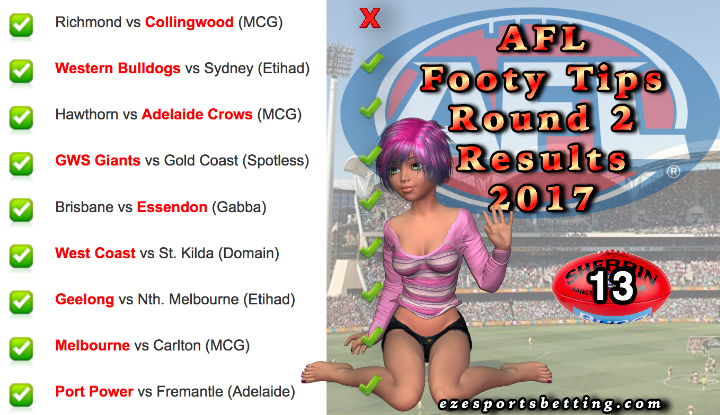 Do you know what the best thing of the AFL Round 2 2017 Results was? I actually won my multi-bet last week. Don’t ask me how I did it but my put money on Richmond, Adelaide, Essendon and Geelong to win. What’s weird is that I normally follow Fortuna’s tips, and she tipped Collingwood.

Too bad I didn’t make the same mistake with Sportsbet’s Million Dollar Tipping competition. Then again, after Port Power annihilating Fremantle my margin was way off. The slaughter was so great that it’s put the Power on the top of the ladder, above the Crows, with a whopping 184.8 percentage.

Something else about week 2 of the AFL 2017 season is one of the worst umpiring decision ever. I’m talking about the ‘push in the back’ decision against Crow’s David Mackay. It’s almost as if Hawthorne’s Paul Puopolo had umpire Andrew Mitchell in his pocket. :tongue_out:

That wasn’t the only bad umpiring decision of week 2 either. Fans and AFL legends had quite a bit to say about some the bullshit umpiring!

I’m sure there are more but I’m leaving that open to you guys. How do you think that bad umpiring can affect a game.