AFL Round 2 2018 Results Horror Tipping round 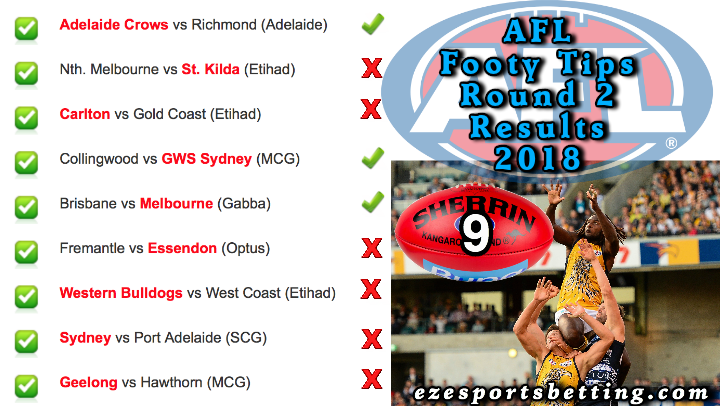 The only highlight of the AFL Round 2 2018 Results was that the Crows won convincingly against last years reigning premiers. Injuries and all, the Crows managed a resounding win. Too bad they didn’t play like that during last years finals.

Unfortunately, apart from two other wins, the AFL Round 2 2018 Results went downhill from there. As far as my Sportsbet multi-bet went, it was my worst ever multi-bet getting every single one wrong. Oh well, shit happens in sports betting which is why responsible gambling is so important.

Only two rounds into the 2018 AFL season and we’ve already seen a week full of upsets. The St. Kilda vs Nth. Melbourne would have to be the first upset of the season. I was so sure the Saints were going to win that I made them the first leg of my multi!

Then there was the Carlton vs Gold Coast game. Not only did Carlton lose, they lost convincingly. Tom Lynch had a cracker of a game that day kicking a career-high eight goals. If it wasn’t for Lynch, Carlton just might have had a chance.  :tongue_out:

Then there is the Fremantle / Essendon game. After Essendon beating the Crows last week, I felt sure they would do Fremantle, but alas, it wasn’t to be. Read the Five Talking Points on that game.

After reading this article, I feel like I’m not the only one disappointed in the Doggies after that last game. Talk about being unprepared for that game.

With another win under their belt, Port Power fans will be ecstatic with being 2nd on the ladder. Even if it is only the 2nd game of the season, I can hear them telling everyone how they’re going to win the flag this year.

As for the Geelong vs Hawthorn game, how bloody close was that one to a win. Talk about an exciting game. Honestly, as much as I would have loved another win, I enjoyed that game so much I wasn’t at all worried about another loss.