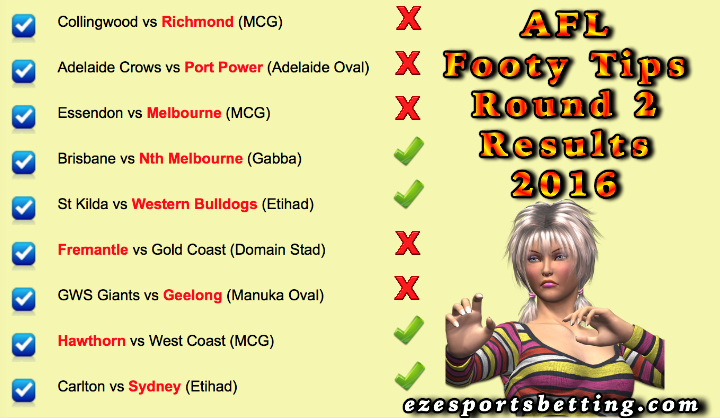 AFL Round 2 Results 2016 after this little rant.

Yeah, to say that Fortuna’s AFL round 2 results 2016 sucked is putting it mildly. Getting only 4 right out of the 9 matches is a pretty poor effort if you ask me. Especially for someone who is supposed to be the sports Goddess of luck.Still, Goddesses can be pretty fickle at times and who knows what lessons those tips were meant to teach us.

Still, you have to admit that some of those results were pretty shocking and unexpected. Take the Essendon vs Melbourne game. Sure Melbourne isn’t the best performing team lately but I’m sure most punters would have tipped Melbourne to beat Essendon. Check out the reacting of Essendon’s upset win against Melbourne.

Another unexpected win, as far as I was concerned was Collingwood beating Richmond. I was sure Richmond would have this game in the bag which is why I made them the first leg of my Sportsbet MultiBet.

As for the Adelaide vs Port Power game, as much as I loved their win, being a Crows fan and all, their win did teach me a lesson. Stay tuned for my next Sports betting tip!

Lastly there’s the GWS Giants vs Geelong game. Maybe there were some punters out there who weren’t surprised at The GWS Giants win but it certainly surprised the heck out of me.

Luckily for me I am a responsible punter. As a responsible gambler I never bet more than I can afford to lose. At least I didn’t lose the whole bet because I still managed to pocket those winnings from the winning legs of my MultiBet. Not to mention the cash backs SportsBet gave me because of their latest special which I mentioned at the end of this post.

I hope you did better with your tips. Speaking of which how well did you do with your footy tips?