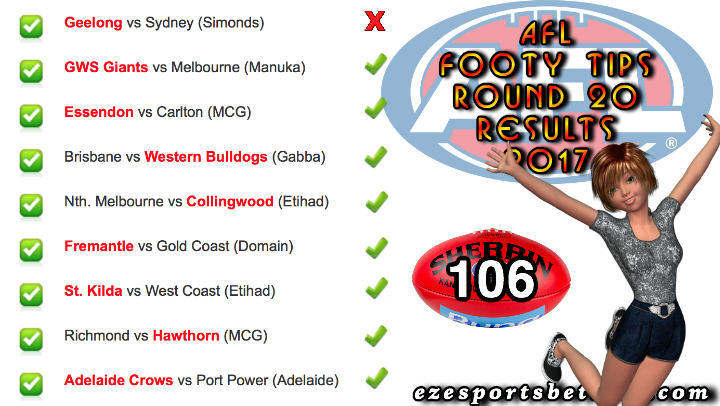 Unfortunately getting one wrong means you totally stuffed any chances of winning the Sportsbet’s Million Dollar Tipping competition. Even if I did tip with 100% accuracy I still wouldn’t have won the Million Dollar tipping competition because I was no where near getting the margin right for the Showdown 43! Shit, the Crows pummeled Port Power so hard that I missed the margin by 71 points!

A little more about the Showdown a little later. I reckon we should take a look at the Geelong vs Sydney game to see what went wrong.

Geelong coach Chris Scott mentions that at least part of the reason for Geelong’s loss was because of Dangerfield’s omission due to his suspension. There are some who would say that perhaps Geelong relies too much on Dangerfield.

Others may think that Billy Brownless has the right idea by blaming the umpires for Geelong’s loss. Really Billy? maybe if they loss by a few points but you can’t blame bad umpiring when your team gets thumped by 46 points!

A Foxsports article states that Port played so dismally during showdown 43 that people wouldn’t blame Port Adelaide supporters for walking out early. Really? I thought as supporters you should support your team through good moments as well as bad ones. I don’t think that walling out on your team is really an option.

Having said that I wouldn’t blame them if they gave their team a little spray via social media.

As for the Crows. I don’t care how badly the Power played, the Crows deserved winning Showdown 43. If anything, Port can count themselves lucky that the Crows accuracy wasn’t what it should have been. If they were kicking straight Port would really have suffered a humiliating defeat instead of being trounced by a mere 84 points 😀

Naturally, the highlight of the game was me winning my bet. :drunk: