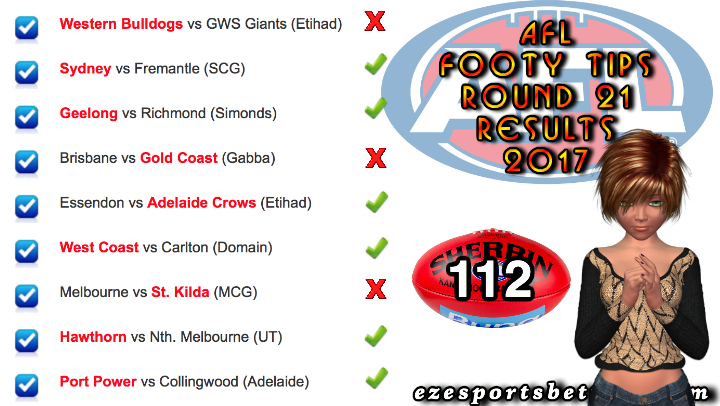 What really pisses me off about the AFL round 21 2017 results is that, once again, we got the first round wrong. The reason it pisses me off is because it stuffed up my Sportsbet Million Dollar Tipping competition right from the start. It wouldn’t be so bad if it was closer to the end of the round rather than the beginning. At least that was the excitement factor would have built up with each winning game. Oh well, shit happens, right?

As it turns out, the GWS Giants were too good for the Western Bulldogs. The Doggies managed to keep up in the first half but went off looking for a bone rather than the footy in the second half. Something you shouldn’t be doing when you’re this close to the finals. Their lack of commitment in the AFL Round 21 2017 Results was to be knocked out of the top eight.

Then we have the Gold Coast vs Brisbane game. Like the Western Bulldogs vs Giants game, Brisbane were definitely the favourites  but Fortuna decided to pick the Giants. The first half seemed to prove that she was right in picking the Suns but some heavy clouds wafted in in the second half blocking out the Sun and their hopes of scoring four points.

Finally, we have the Melbourne vs St. Kilda game. Here is what Melbourne has to say about that game.

All in all I suppose that getting 6 out of 9 isn’t too bad as far as tipping goes. As much as I like to see a perfect round I know that is a pretty hard ask. Oh well, we still have a few more rounds left. Maybe Fortuna will get one in before the season is over.

At least the Crows got another win under their belt. That was a brilliant game and as often as the Bombers narrowed the lead the Crows always ensured they never got too close to be a problem.

I’m afraid that next weeks game against Sydney will really make the Crows work for a win. Sure hope they can bring it out.