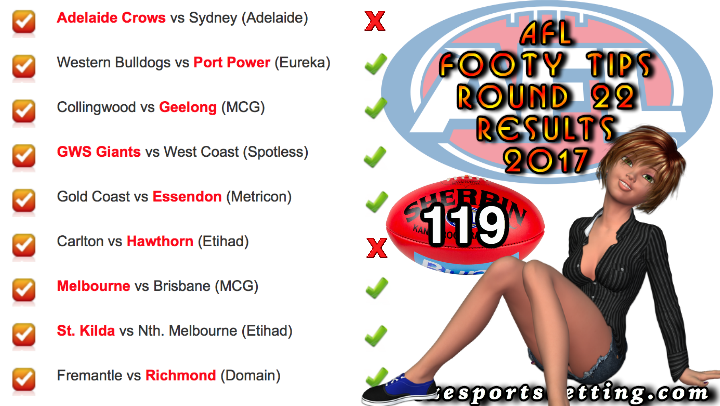 Unfortunately for me I put money on the Crows and they let a perfectly winnable game slip through their fingers. That was the first of the two wrong tips for the Fortuna’s AFL Round 22 2017 results, the second being the Carlton vs Brisbane game.

For me though, as far as the AFL Round 22 2017 results go, the Crows losing to Sydney was by far the bigger loss. That has nothing to do with me losing my bet either. It’s all to do with the fact that the Crows should have won that game. Let’s have a look at what some of the experts had to say about that game.

The Guardian called that particular game a thriller and it would have been more than that for Sydney fans. They did point out,

“The scoreline tells it all, the Crows having every chance to win this but throwing it away with their kicking. Through the second half the home side controlled the ball out of the guts, but Sydney are the best defence in the comp for a reason. In the end, the losing side won the inside 50s by a margin of 62 to 42. Remarkable.”

The Advertiser had this to say about the Crows performance, “The Crows finished with 51 more disposals, 21 more contested possessions and 21 more inside 50s than the Swans but still lost.

This was partly due to poor conversion, with Sydney kicking 13.5 to 11.14 as Adelaide butchered opportunities in front of the sticks.”

Yes, the Crows kicked an awful lot of points in that game, and if only one of them was a goal the result of that game would have been entirely different.

The result would also have been different if the umpires didn’t stuff up awarding a 50m penalty against Eddie Betts.

Umps Got It Wrong On 50m Penalty