AFL Round 22 Results Fortuna Does Better 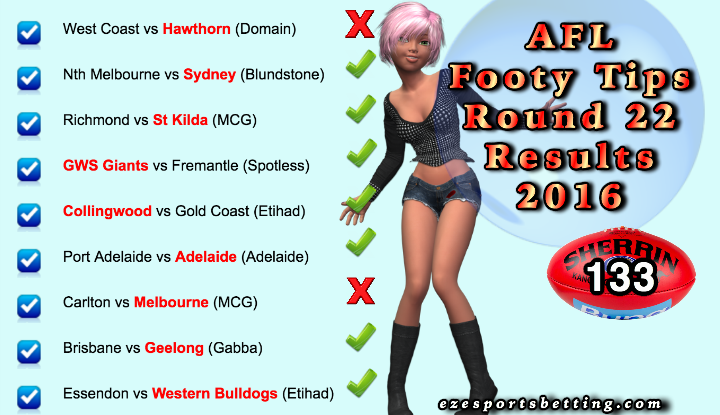 I’m glad to say that Fortuna did a whole lot better with her round 22 AFL tips. As you can see from the image above Fortuna’s AFL Round 22 results are pretty good getting only two tips wrong. These were the West Coast vs Hawthorn and Carlton vs Melbourne games. Probably the only one that would have confused most tipsters was the Carlton vs Melbourne game

Unfortunately for me I backed Hawthorn to win and they played dismally. They couldn’t even win one quarter which meant I missed out on getting my money back from Sportsbet.

Probably the biggest AFL fiasco last week was the banana skin throwing incident. This was where a female Port Power supporter threw and banana skin at Eddie best. The Age was just one of many media that reported on this incident.

All I want to know is what the hell was this woman thinking? Does she not realise that her own club has seven or so indigenous players? I can’t believe that she missed out on all they hype over the Adam Goodes incident in the recent past. By all rights she should have known better. She’s definitely old enough to know better.

At least other Port supporters were quick to denounce her actions.

Banning her from future games should definitely occur but a life time ban is probably over the top. I feel Port’s idea of her being involved in Port’s Aboriginal cultural awareness programs is a brilliant idea. Maybe this way she will be able to better understand how wrong her actions were.

OK, now that all that shit is behind us its almost time to have a look at this weeks AFL tips. Stay tuned for the up and coming post.