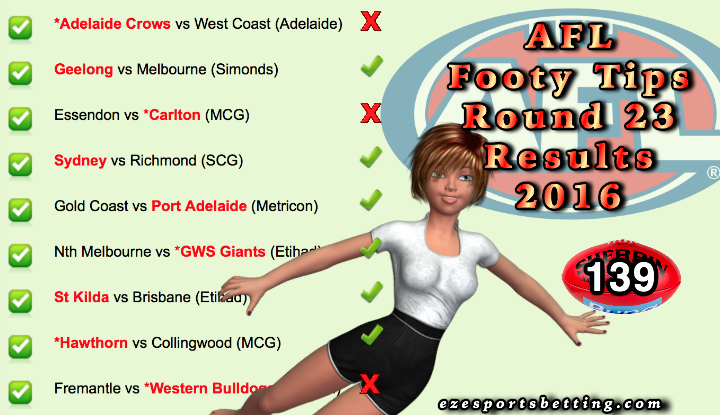 There are two things that really pissed me off about Fortuna’s AFL Round 23 Results. The first is only partly her fault, and that is that out of all her picks I had to include all her losing picks as part of my Sportsbet multi-bet. In my defence I was sure that those three games would turn out to be winners.

Come on! How the hell did the Crows allow West Coast to beat them at home? Especially when a win meant so much to them. Now, instead of securing a top two spot they’re in 5th spot. I totally agree with Tom Lynch when he calls that game the Crows worst performance of the year. Lynch said…

Sixteen wins and six losses — you could say it’s been a pretty solid year, but with what was on hand last night and the opportunity that lay before us, it was really disappointing.

To me they just didn’t have their heart in the game. There were way too many time when they literally handed the ball to West Coast. They had 78 turn overs compared to West Coasts 66!

Fans certainly couldn’t complain about the free kicks either as the Crows received 20 frees compared to the Eagles 12!

All Crows fans can hope for now is that this loss will spur the players to greater efforts in the finals. They’ve worked too hard to give up now.

As for the Carlton vs Essendon game. I say good on Essendon for getting another win with all the shit their club has had to put up with recently.

As there is a bye this week I need to work out what to post this week. Maybe another Hot Sports Babes Post? What would you like to see?