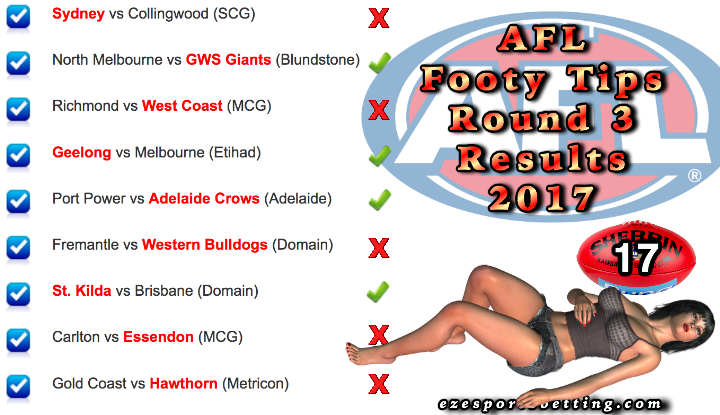 Whereas I don’t think anyone, apart from Collingwood fans :tongue_out: expected Collingwood to win. I sure as hell didn’t expect them to take complete control of the game. What’s really upsetting was it was the first leg of my Bet365 multi-bet. That’s how sure I was they were going to win. :bash: Check out some of the important stats of the game.

After getting the first leg of my multi wrong it didn’t really matter that I got the second leg of the multi wrong. West Coast beat Richmond! Man, I sure as hell didn’t see that one coming. I’m sure most punters and tipster may not call that match an upset but if nothing else it was a pretty exciting game. Check out this rundown of the Richmond vs West Coast match.

Biggest Upset Of AFL Round 3 2017 Results

Of all the Round 3 2017 upsets I reckon the one that shocked punters and tipsters the most would have to be the Gold Coast vs Hawthorn game. Even Fox Footy called it the biggest upset of the round. Hawthorn used to be the powerhouse club but now sits on the bottom of the ladder. Must suck to be Hawks fan right now.

Best bet for the week would have to be for those lucky Bet365 punters who backed Fremantle, especially as they were paying $5.25.

AS for the match of the week that would easily go to Showdown 42. That was a close game and I loved that the Crows were able to pull it off. That makes it 4 Showdown wins in a row making it 21 wins each. Find a complete report of the latest Showdown here.

Now that we’ve put the shocking week 3 results behind us, lets hope we can do better with week 4.