My AFL Round 4 2017 results were like my round 2 results, pretty bloody awesome. :drunk: I know we’re only four rounds in but it sure has developed a distinct pattern. The odd rounds, one and three, were pretty crappy, and the even rounds, two and four, were very good. Another great thing about the AFL Round 4 2017 results is that I placed two winning bets. I wrote about the first one in my last post. The second winning bet was one I placed on the spur of the moment.

You see Sportsbet is kind enough to give their members bonus bets. They seem to accumulate with each winning bet. The thing with their bonus bets it that thy expire if you don’t use them. Rather than lose it I put it all on St. Kilda to beat Collingwood and they did. More money in mt Sportsbet bankroll. Another great reason to be a Sportsbet member. Join HERE and enjoy all their member benefits, including their Million Dollar Tipping competition. 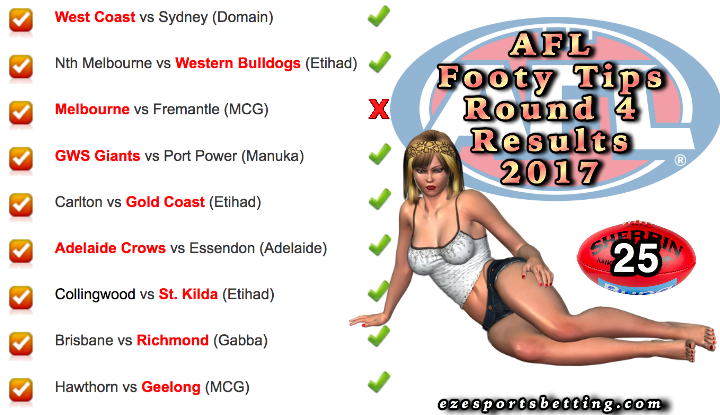 The only one that let us down this week was the Melbourne vs Fremantle game. Eight out of nine isn’t too bad so I’m pretty wrapped with that result.

I always love it when the Adelaide Crows have a great game so it’s nice to see news headings like, Eddie Betts leads Adelaide Crows to thumping of Essendon after week marred by racism controversy. It would have been great for Eddie to have such a great game, 6 goals and 2 points, after all that bullshit last week.

Speaking about thumpings, it would suck to be Hawthorn right now. Still, there are those that can always see a silver lining when things look really bad. Paul Roos sees positives in Hawthorn’s defeat. Good on ya Roos, I’m sure all the Hawthorn fans are struggling to see that silver lining right now.

As for the Crows, they’ve been knocked off the top of the ladder because of Geelongs thrashing of Hawthorn. I’m not too fussed with that. I only hope that the Crows can keep their momentum going.

Let’s hope that we have some great results with the round 5 2017 tips.