While Fortuna’s AFL Round 5 2017 Results wasn’t perfect its still pretty bloody good. Like the round 4 results Fortuna got 8 right again. Out of the 5 rounds Fortuna has managed 3 rounds where she’s got 8 out of 9 right. While she still hasn’t got the perfect round yet I reckon she’s still doing pretty good.

Before we go any further lets have a look at Fortuna’s AFL Round 5 2017 Results. 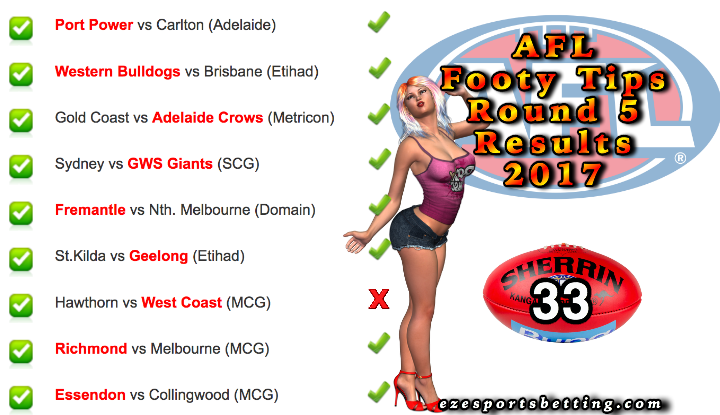 As you can see in the AFL Round 5 2017 Results above the only game that let us down was the Hawthorn vs West Coast match. Trust the Hawks to pick round 5 to finally decide to play. Naturally we all knew that the Hawks had to break their drought sooner or later but in this case I would have preferred that had done it later. Why? Because they were part of my multi-bet. Oh well, lucky for me I’m a responsible gambler. 😎

The Roar has a nice match review of that particular game. It seems they feel it’s not that the Hawks played well so much as West Coast played dismally. Then again, West Coast doesn’t usually perform well at the MCG. The Age even go so far as calling it the MCG Hoodoo!

Another highlight for me was the Crows vs Gold Coast game. Fox Sports professional view is the Crows actually do have a credible midfield. The question is can they pull off a win against the undefeated Richmond. Jack Riewoldt doesn’t believe the Crows can win. I hope the home advantage can overcome the few injuries the Crows have picked up of late.

Essendon beating Collingwood in the Anzac Day match today sure proved to be very popular with the fans. Read a goal per goal update of the match on the Guardian.

For a complete list of AFL round 5 highlights check out this link.

Tags: round 5 highlights, round 5 results