Fortuna’s AFL round 6 2017 results suffered by one extra loss from her round 5 efforts. All in all 7 out of 9 wasn’t all that bad. I’m pretty happy with that result because her tips allowed me another winning bet . You can see the AFL round 2017 results in the image below. 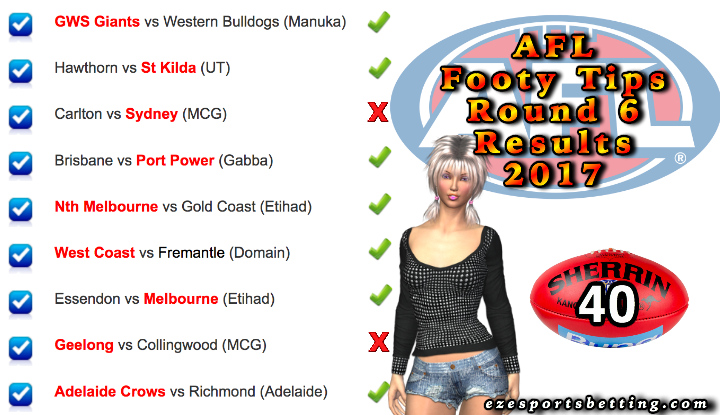 The only game that I was a little worried about was the Hawthorn vs St Kilda match. After Hawthorn’s incredible win last week I had this nagging feeling that they would stuff up this round too. It almost looked that way at the beginning of the round but luckily St. Kilda stepped up and put the Hawks down.

I have to admit though that it was a little upsetting when Sydney lost to Carlton. That was one match that I was pretty sure would turn out the other way. Most punters felt the same way too. It was because the odds were so in favour of Sydney winning that I didn’t include it in my multi-bet. Luckily for me too :tongue_out:

The other loss in Fortuna’s AFL round 6 2017 results was the Geelong vs Collingwood game. That was another game that would have surprised a lot of punters. Read why Geelong lost to Collingwood in that round.

Although I backed the Crows to beat Richmond I didn’t put any money on them because the odds were so poor. It was also why I didn’t include them in my multi-bet. While I was hoping the Crows would win that game I didn’t expect them to slaughter the Tigers the way they did. You have to admit that 140 to 64 is a resounding win. One which ensures the Crows place at the top of the ladder. They are now the only unbeaten team in the AFL. This is also their best positioning since they started in the AFL.

One thing I’ve learned in sports, and sports betting, is that nothing is ever carved in stone. You never know when the tables will change. At the moment Sportsbet has the Crows at favourites with $3.50 odds. It will be interesting to see how that will change as the season progresses.