If you’re going to talk about a crappy round of AFL tipping then the AFL round 7 2017 results would definitely fit the bill. I haven’t even heard from Fortuna yet on what would have to be her poorest result of tipping ever. I’m sure when she does show up she’ll blame it all on Loki that mischievous Norse god. I’m sure she’d love to get a hold of Thor’s hammer so she could give Loki a taste of of the headache that a lot of punters are feeling because of the AFL round 7 2017 results. 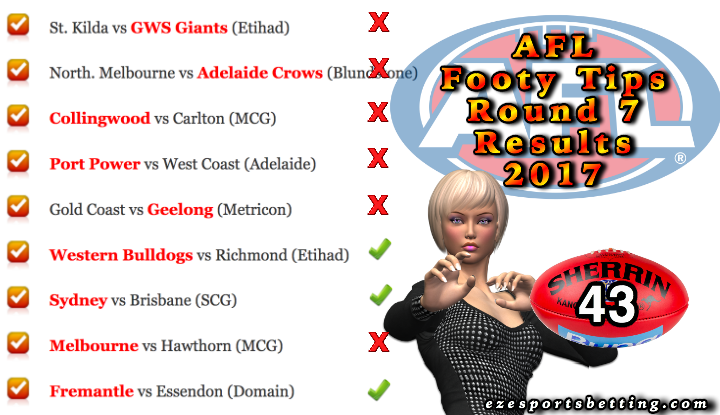 As you can see in the image about round 7 definitely was a very poor result as far as tipping goes. Only three tips turned out to be winners but most punters, and AFL tipsters, would agree that round 7 were full of upsets.

If there had to be one major upset of the 2017 AFL season so far it would have to be the North Melbourne vs Adelaide Crows game. The Roar have 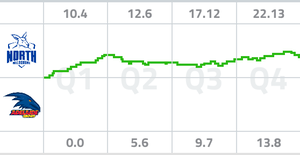 even called it the Upset Of The Year Contender! If it wasn’t bad enough that they lost a game that everyone thought they would win, they absolutely got thumped by the Roos. If you missed that awful game, I say that as an avid Crows fan, you can see a quarter by quarter score in the image over there on the right.

Why The Crows Lost To North Melbourne

So, why did the Crows lose to the Roos? I have put together the top three theories why the Roos thumped the Crows so convincingly.

Truth be told it wasn’t any of those, it wasn’t even losing the coin toss and the fact the Roos had a strong win blowing all their shots through the goals. Nope, the reason the Crows lost was because, on the day, they were outplayed by a better team. Lets hope they do better next week.

The St.Kilda vs GWS Giants game was another match that surprise a lot of AFL fans. As far as I’m concerned it was definitely an upset. What was most upsetting was that I had them as the first part of the leg in my Bet365 multi! Overall though their loss wouldn’t have made any difference because the rest of the multi were all losers as well. That’s the first time that has ever happened since I’ve started my sports betting.