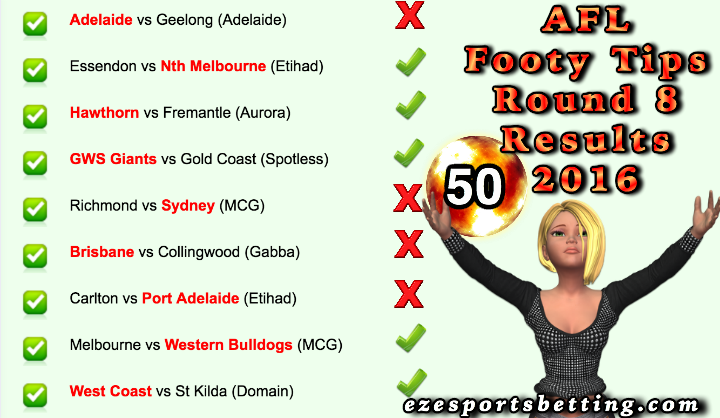 Looks like Fortuna had a bad week this week with AFL Round 8 Results 2016. Then again 5 out of 9 isn’t all that bad, a lot better than 4 out of 9 :tongue_out: That brings her running total for the 2016 AFL season to 50! How does that compare to your running total? Let me know in the comments.

Now, lets look at some of those losing games.

Most punters would agree that this match could have gone either way. All I can say is that the Crows were very lucky that Geelong missed so many goals otherwise the results would have been embarrassing. Because of Geelong’s poor scoring performance the Crows actually had a shot of winning this game if only they didn’t turn the ball over so bloody often.

Oh well, at least their scoring shots were a lot more accurate. Now all they have to do is to get the ball into their 50 more often and convert them to goals.

Richmond beat Sydney! Really? That’s the thing about AFL, you just never know how a match is going to turn out. That’s why one should never bet more than they can afford to lost. Still, most would have found it to be a thrilling game, especially if they had a small wager on it. 🙂 The Daily Telegraph had an interesting take on the Richmond vs Sydney game, saying it was a worrying sign against this weeks clash against the Hawks.

The real highlight to the AFL Round 8 Results 2016 was that Port Power let Carlton beat them. At least their loss helped keep the Crows in the 8. Must hurt the Port Power fans having their team lose a game which by all rights they should have won.

Now that the AFL Round 8 Results 2016 is behind us it’s time to look at what round 9 has in stall for us. Hopefully Fortuna will do better this week.