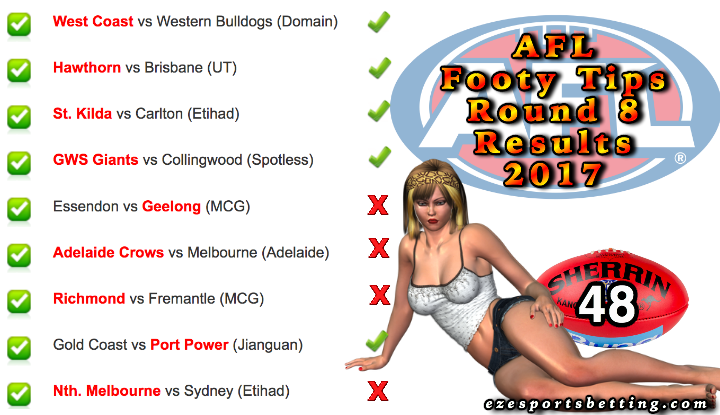 That’s certainly better than getting the first five in a row right? Who would have thought that Essendon would have trounced Geelong. So how in hell did the Cats let the Bombers blast them out of the MCG? According to the Herald Sun, they left the back door open and then Bombers took advantage of this and their lack of commitment.

It’s interesting to note that for two games in a row now Sloane has been targeted and kept at bay. Whilst a match shouldn’t depend on one player they’re going to have to work something out to combat this tactic.

Richmond, like the Crows, have suffered two losses in a row. That was definitely an interesting game. They were neck in neck in the first half of the game when Fremantle got away from them in the third quarter scoring 4 goals 5 to their 4 points. While Richmond fought back in the last quarter they lost the game by a measly two points!

I have to admit I was on the end of my chair for the final seconds of that game. Oh well. It wasn’t to be.

So, what has the lesson I learned in the AFL round 8 results 2017? That you just never, ever know how the goals will roll in the AFL, or any sport for that matter, which is why you should always gamble responsibly.