Up & Downs Of AFL Tipping 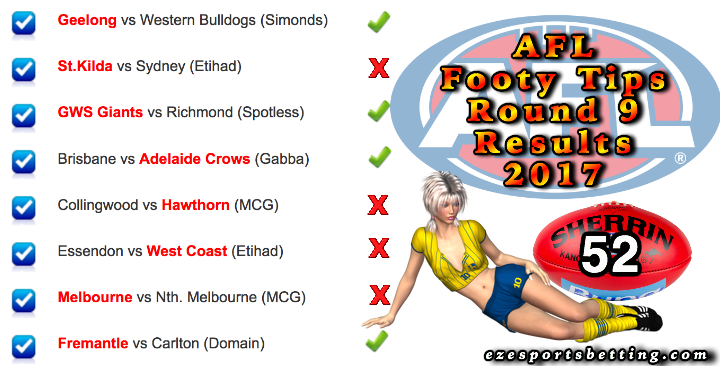 As round 9 was a bye week we’re missing Port Power and the Gold Coast because their China trip took too much out of them and they needed to recover from the trip. :tongue_out:

I suppose 4 out of 4 is OK as far as tipping goes. Sure I would love to get more but shit like that happens when sports tipping is concerned.

Unfortunately for me the first and third legs of my Sportsbet multi were losers and so I lost my bet. If only I had gotten one leg wrong Sportsbet would have refunded my bet in bonus bets. Unfortunately it wasn’t to be and I lost part of my multi-bet.

Crows Show Brisbane They’re In It To Win

Finally the Crows manage to seal a win after their last two winning games. After a slow start the Crows managed to beat Brisbane by more than a comfortable margin of 80 points. Final scores 21-14 140 to 7-18 60! The main goal scorers were Cameron with 4, Walker with 3, Betts with 3, Lynch with 3 and Greenwood with 3.

According to Fox Sport we should keep an eye on Hugh Greenwood as his three goals on his AFL debut may prove him to be the Crow to watch out for. That article also points out the Crow’s fatal flaw this season so far.

You may remember in my last post that I told you to watch out for three particular games? As it turned out two of those turned out to be winners. I purposely didn’t include them in my multi because I thought them to be a bit dodgey, Didn’t make much difference as I stuffed up my multi anyway :bash: Oh, well, there’s always round 10 :tup: