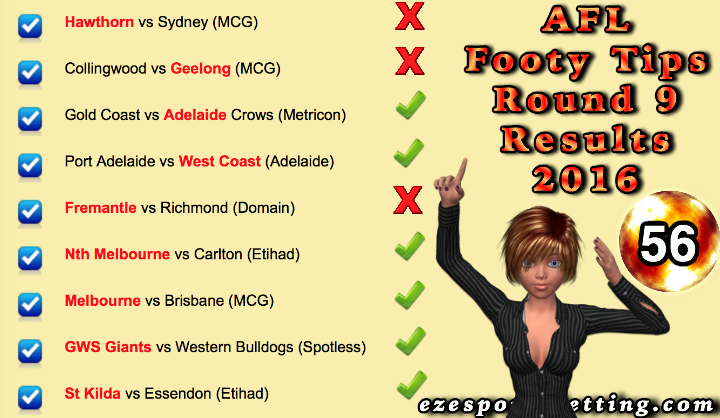 Fortuna’s AFL Round 9 Results 2016 wasn’t all that bad. I’m pretty happy with getting 6 out of 9 right. Especially considering some of the upsets! But that’s what makes the AFL so interesting and why you should never bet more than you can afford to lose.

Probably the biggest upset of AFL Round 9 Results 2016 would have to be the Collingwood vs Geelong game. Stirling Coates of The Roar reckons its one of the biggest upsets of the year and I tend to agree with him. It was an absolute shocker. Geelong was never in the game losing every quarter. Even if they did win a quarter I still wouldn’t have gotten my cash back, because of Sportsbet cash back deal, because I got the Fremantle vs Richmond game wrong as well.

Of course the highlight of the AFL Round 9 Results was that the Crows won and Port Adelaide lost. I don’t want to gloat too much though because that puts us only one game above our nemesis and things can change at any moment.

The Crows win at Metricon means they have yet to lose a game at the Metricon Stadium. Too bad they didn’t play Geelong there last week.  :tongue_out: The Age say that the Crows were the team to beat and that they are a September contender but I reckon the only reason they shone so much was because the Suns were lacking so much lustre.