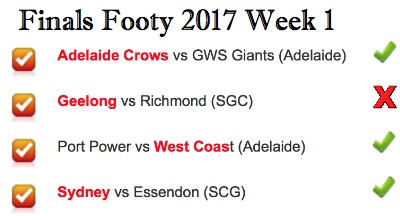 As a Crows supporter this was a very important game for me. A win gives them a bye so they can get ready for their next game in a fortnights time. Not to mention a home preliminary finals.

It was great to see them lead in every quarter, especially because Sloane was out of the game. The Crouch brothers certainly picked up the slack for the missing Sloane. I’m sure that the other teams are a little more worried about beating the Crows after their performance last week.

As good as the win was I would love to see their kicking accuracy improve, especially from Tex who I’m sure was disappointed in his kicking results.

I really expected Geelong to win this game, but alas that wasn’t to be and it was the only tip I got wrong in my week 1 preliminary finals tips. Certainly not the sort of game one would expect for finals footy. Certainly not where near as exciting as the Crows vs GWS Giants game. Geelong will have to regroup if the plan to beat Sydney next week.

As for Richmond fans, how excited are they to be in their first finals for 16 years!

As far as Essendon goes it was always going to be a hard ask for them to beat Sydney. Still, they can all hold their heads up high to get as far as they did considering all the crap they had to go through last year.

What can I say, Port lost, just as I predicted in last weeks post! The best thing about the loss was that I won my bet putting another $27.50 into my sports betting bankroll. Shit, even if they lost I still would have pocketed the money because of the Sportsbet 24 Up, You Win promotion.

As far as finals footy goes that was a cracker of a game. I don’t think anyone would disagree with that.

So, Power and Essendon are out as we go into week 2 of finals footy

Have you any thoughts on the AFL Week One Finals Results I’d love to read them in the comments below.