Do you remember how I backed Australia in the Australia vs Spain World Cup Game a few days back? You can read that post in my last bet of the week. It shows the three different wagers I placed on the Socceroos. I was sure that one of them would come through. Alas, I lost on all three accounts. Australia lost, they didn’t score in the second half and obviously Spain did score. Actually, they scored three times. The final scores in the Australia vs Spain match was Spain 3, Australia 0.

The three Spanish goals were by Santi Carzola, David Villa and the final goal by Fernando Torres. The first before half time and the last two in the second half. Yep, it looks like the Spanish players finally decided to wake up and show the world their true form. Too bad that it had to be against the Aussies.

You know what though. I still think the Socceroos did us proud. You have to admit we had a pretty rough draw in the 2014 World Cup. Not only did we have to play Spain and the Netherlands, the last World Cup finalists, we also had to play Chile. I suppose the fact that Tim Cahill was out of the game didn’t help. To be quite honest, if I knew Tim wasn’t going to play I probably wouldn’t have place those bets. According to Wikipedia Tim Cahill has been Australia’s top scorer, scoring 5 out of the 11 goals in their World Cup games. 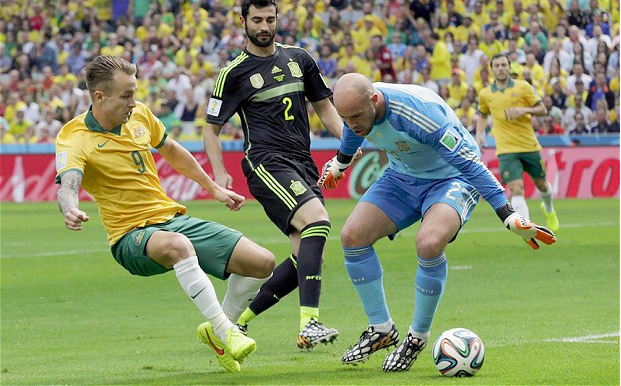 Looks like there was a bit of a heart stopping for the Spaniards from Adam Taggart.

It would have to be the Spanish. The Australians have nothing to be ashamed of. They had an impossible draw in the 2014 Fifa World Cup and they played extremely well. I was proud of them and I was very proud to see all the support that the Aussies in Brazil gave to the Socceroos. The interviews I’ve seen on TV showed the Aussies loved their time in Brazil and more than enjoyed all three matches that the Socceroos participated in. There was even a short interview from some Spanish fans who praised the Aussies for the way they handled themselves in this years World Cup.

Unfortunately for the Spanish, the reverse is true. I’m sure their reception when returning home will be a lot different from the one the Aussies will get.

The good thing about all this is that every time the Aussie go to a world cup they’re building soccer’s popularity in Australia. Who knows, in time our young emerging soccer players will be a force to be dealt with in future World Cups.