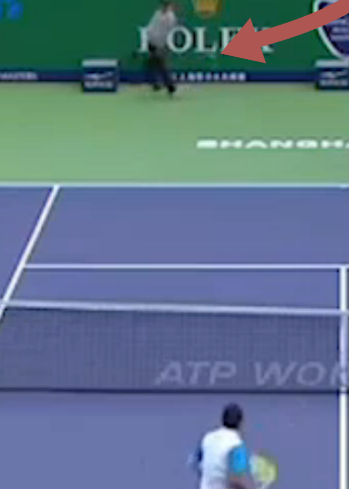 Bad Boy Kyrgios At It Again?

I’m not at all surprised that people are bashing Nick Kyrgios again. The latest Kyrgios bashing occurred during his Shanghai outbursts. While I admit that Kyrgios needs to be more focused during his games and need to control his temper a little I reckon they’re making a mountain out of a mole hill by accusing him of attempting to hit a linesman with a ball!

The link above will show you a video of the Kyrgios / Linesman incident. I took a screenshot of it which you can see on the left. The ball is just below the L on Rolex. The ball would have missed jim even if he didn’t arch is back. Even so Chair umpire Mohamed Lahyani sanctioned Kyrgios saying, “the linesman had to jump away, it was very dangerous…” Dangerous? Really? What a load of bullshit!

Firstly, the ball would have missed him, although it probably would have got him when it rebounded off the wall. Secondly I doubt anyone would have called it dangerous. Thirdly, it’s not like our bad boy Kyrgios did it on purpose. He hit the ball out of frustration, something many tennis players have been known to do. He certainly didn’t target the linesman who didn’t seem too concerned at all.

As for the swearing our bad boy Kyrgios isn’t the only tennis player to swear on court. Remember that string of F-Bombs that Serena Williams let fly during the French Open? Andy Murray is another well know F-Bomb protagonist. Seems to me the real culprit on the tennis court are the on-court microphones. Do we really need to hear what the players are saying? If we do then why should they be penalised things said in the heat of the moment. Is it really fair to  force players to suppress their characters by muffling their frustrations for fear of penalties? Shit, here we have true reality TV and they’re trying to turn it into kiddies playtime TV!

What really pisses me off is the way people are attacking him on social media, saying bad boy Kyrgios is bad for tennis. Really? Seems to me he makes tennis so much more interesting. Maybe he’s not as funny as Adam Sandler in Happy Gilmore but you have to admit he’s pretty bloody entertaining!

What are your thoughts on the subject?