Yep, Bet365 wins for me again! You may remember my last post, where I went against Lady Luck’s advice and placed a bet on the the Adelaide United vs Melbourne Victory game last week? I was going to place a bet on Adelaide United to win but because Lady Luck told me not to place a bet and I really, really wanted to bet on that game I did the only thing I could do in that situation. I placed a $5 wager on Adelaide United to win and a $7 wager on Melbourne Victory to win. The only way I could lose was if it was a drawer. And we all know how easily that can happen when soccer is concerned. 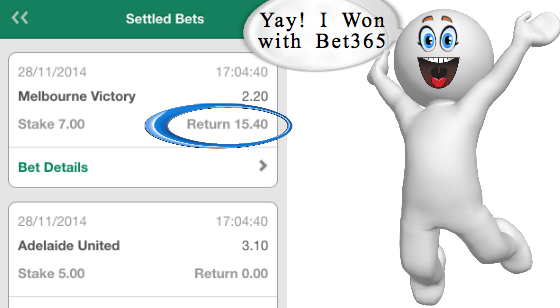 Yeah, I know it doesn’t sound like much but it’s still almost a 30% return. I’m not getting that sort of return at any of the banks. Too bad I can’t turn all my bets into a winning bet. But you know me, as much as I like winning I love the extra excitement I get from sport when I’ve placed a bet on a match, race or something.

As it turns out Melbourne Victory beat Adelaide United 3-2. You can go to the A-League site to read the highlights of the match. Personally I found the game to be quite frustrating. Especially because we gave away two own goals. If it wasn’t for those goals Adelaide United actually would have won.

The highlight of the match for me was watching Kevin Muscat lose his cool, kicking the crap out of something that was within reach of his foot.  :RLOL:

Overall I reckon that Adelaide United played better and they deserved to win. And they would have won too if they didn’t give away those two own goals. Oh well, shit happens.