Yep, this week I’m featuring Caroline Wozniacki as the Hot Sports Babes! I know, I know, another Tennis hot sport babe! But 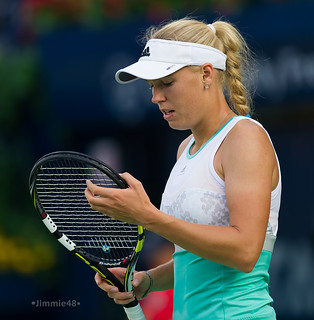 what can I say, she is hot and she happens to play tennis.

Wikipedia has a pretty good profile on Caroline Wozniacki but I’ll give you a quick rundown. Caroline Wozniacki was born on 11th July 1990. That makes her only 24 years old and me old enough to be her father. I reckon that, and yeah the wife, puts her out of my league. Caroline Wozniacki turned pro on the 18th July 2005 when she was only 15! It took her 5 years from turning pro to reach the no1 ranking on 11th Oct 2010.

Danish born, like many tennis players she has mastered more than her own tongue. It amazes me how so many of these tennis stars happen to speak more than one language. Caroline Wozniacki is multilingual speaking English, Danish and Polish frequently.

At only 24 years of age I reckon she still has a fair few years of tennis still left in her. Good thing too, because I reckon there are so many of her fans who would hate to see her disappear into the limelight. She’s an amazing player to watch on the tennis court and that’s not only because she is an incredibly sexy hot sports babe.

Wikipedia has this to say of Caroline Wozniacki’s more recent efforts in 2014.

At the 2014 Aegon International she reached the semifinals with wins over Samantha Stosur, Sloane Stephens and Camila Giorgi before losing to the eventual finalist Angelique Kerber. Then Wozniacki competed at the 2014 Wimbledon Championships where she was 16th seed. It was the first time for her reaching the fourth round since 2011 after a straight set wins over Shahar Peer, Naomi Broady and Ana Konjuh. In the fourth round she lost to Barbora Zahlavova-Strycova.

Wozniacki’s first tournament following Wimbledon was the 2014 İstanbul Cup. In the first round she faced Swiss rising star Belinda Bencic annihilating her 6-0, 6-0. Her next two matches were against Karin Knapp and Karolina Pliskova respectively, both of whom Wonziacki beat in three sets. In the semifinals, Wozniacki defeated Kristina Mladenovic. She faced Roberta Vinci in the final, crushing her for a 6-1, 6-1 victory to secure the title, her first of the year and 22nd of her career.

What amazes me about a lot of these tennis stars is that they speak more than one language. Caroline Wozniacki is multilingual speaking English, Danish and Polish frequently.

Finally, I managed to find a video of the very sexy Caroline Wozniacki as she not only talks about but shows off her hot sports babes body in the “This is me behind the scenes’ underwear shoot.

Caroline Wozniacki Underwear Collection This Is Me Shoot