While I agree that 4 out of 9 was a pretty bad result I reckon you would have to admit that round had quite a few upsets.

What really sucks was those results really screwed the MultiBet I placed with Sportsbet! Especially because the first of my MultiBet was on Western Bulldogs to beat to beat St. Kilda. Shit, who in hell would have thought that St. Kilda would have won that game. What really pissed me off was getting that particular game ruined any chance of winning the MultiBet. 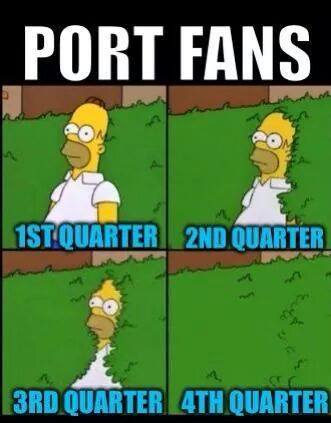 As for my round 6 AFL MultiBet results I only got 3 of the 6 right, one less than my last MultiBet results. My winning bets were Adelaide, Sydney and Fremantle. At least that won $3.56 so I managed to salvage a little bit of my $10 wager.

At least there was one highlight to the round 6 of the AFL. Port Power lost to the West Coast Eagles. While I’m a tiny little bit sad that a South Australian team lost I’m stoked as far as the Port Adelaide supporters are concerned.

The reason why so many dislike Port Power fans is because for the major part they’re so bloody arrogant as far as their team are concerned.

Take ShowDown 38 as an example. Most of them thought they were going to annihilate the Crows beating them by 10 goals or more. They thought the same about West Coast Eagles, thinking that it was going to be an easy win.

As it turns out they loss. A loss that the Anti-Port Adelaide bloke on FaceBook went to  town on. I pinched that image you see on the left from one of the many that he’s posted on FaceBook.

As for the Crows, while they won that game I reckon they could have done so much better. Still, they won and thats a hell of a lot better than what Port Adelaide was able to do.  :drunk:

In case you’ve missed out last weeks AFL round 5 results you can read that post HERE. Fortuna did pretty well with her AFL footy tips getting eight out of the nine right. Who could blame her for getting Sydney wrong. I don’t think anyone saw that one coming.

Now for this weeks Fortuna’s AFL round 6 footy tips. 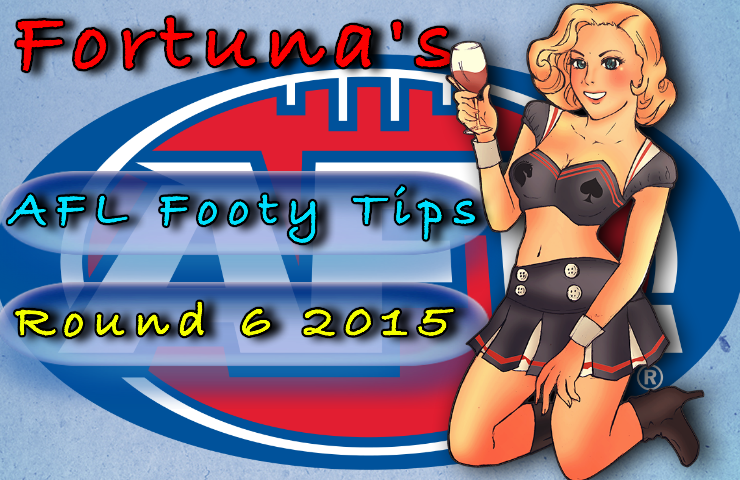 Strangely enough I completely agree with all of Fortuna’s AFL round 6 footy tips. It’s got nothing to do with 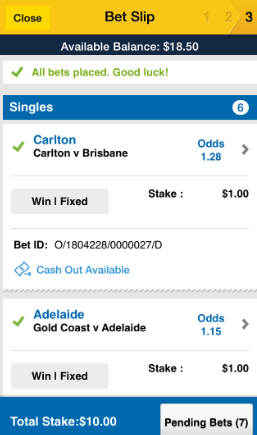 Fortuna getting more right than I did in round 5 either.  :tongue_out:

Now that I have the footy tips out of the way I’m going to fire my Sportsbet app up to place this weeks MultiBet. Hopefully I’ll have a bit more luck this week and there won’t be any upsets like the Sydney vs Western Bulldogs game last week.

For my AFL MultiBet this week I’ve decided to back the following teams;

You can see from the image on the left that I actually have placed those bets. I’m hoping this bet actually comes through as it will make it my first MultiBet win.

As you can see the odd on the individual teams are pretty low so the most I could win if I placed a single $10 bet would be $13.80 by backing Western Bulldogs. If my MultiBet comes through I will win $22.58 which is a whole lot better. Heck, if I get cold feet during one of the games I may even Cash Out and take my accumulated winnings up to that point. I copied this from the SportsBet Blog about their latest Cash Out King.

Our Cash Out King definitely pulled out at the right time on the weekend. He had a $10 win-draw-win multi on the 10 EPL matches of round 35.

He picked the 8 winners on Saturday’s night matches, including Sunderland to defeat Southampton at $4 and West Brom to defeat Man Utd at $9.

His ninth leg was Tottenham to defeat Man City ($3.60) at White Hart Lane. With so much riding on this selection, our Cash Out King got cold feet and decided to pull the pin on his mammoth multi. What a great call!

He cashed our for $9.5k and Tottenham were beaten by Man City 0-1 after Sergio Aguero’s eight yard strike on 29 minutes.

The last leg requires Arsenal to defeat Hull ($1.61), which is yet to be decided. Regardless of the outcome, this lucky punter would have walked away with jack squat if it wasn’t for his choice to Cash Out and pocket $9,492!

Man, I wish I was that lucky, but then my odds were nowhere near as good.

Have you placed your MultiBet yet.

I reckon its time to have a look at the AFL Round 5 results as far as Fortuna’s AFL footy tips are concerned.

That post also spoke about the MultiBet that I placed with Sportsbet. For those of you who haven’t read that post I backed Sydney, Hawthorn, West Coast, Fremantle, Essendon and Adelaide to beat Port Power.

You can see the results of my MultiBet there on the right. Yep, unlike most online sports betting sites out there I actually do place bets on various sports games.

You can see at the top of the list that my MultiBet was a total bust. That’s because I backed Sydney to win. Who the hell would have thought that Western Bulldogs would actually beat Sydney. I reckon that would have to be the upset of the AFL round 5 results.

The only other one that I got wrong, and I was probably pretty stupid to pick them, was the Adelaide Crows. Still, I honestly thought that they could have won that, and they could’ve too if they’re kicking accuracy was better. Still, at the end of the day, even though some of the umpiring sucked big time, and I hate to say this, Port Powers was the better team and deserved to win Showdown 38!

What I like about MultiBets is that even though you may lose the main bet you still get something for the rest of your winning bets. So, all in all it wasn’t a total loss as I still won $5.34.

Interesting highlights that came about in round 5 of the AFL include;

You may notice in my MultiBet that apart from the Adelaide Power game I didn’t back any of the questionable match-ups which is why 4 out of my 6 bets paid off.

Something you may be interested in is that throughout the Adelaide Crows Port Power game I check out SportsBet Cash Out feature and I was able to cash out right up to the beginning of the final quarter.

Don’t forget to join SportsBet to get some of the best sports betting deals out there, including their Cash Out feature.