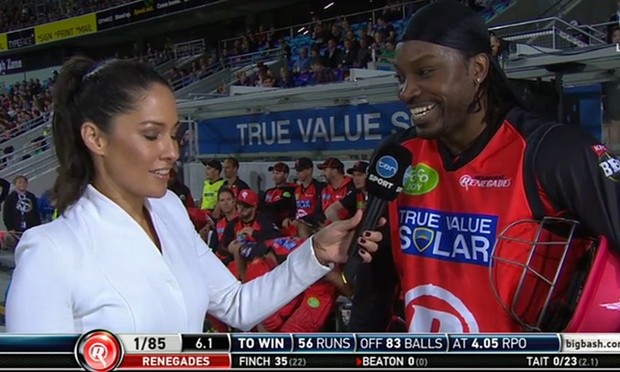 Ever since that interview people have been giving Chris Gayle a hard time. While I admit his comments weren’t the most professional I don’t think he should be crucified for it. I also don’t believe that he was ‘bullying’ Mel McLaughlin.

It seemed obvious that Chris has never been that close to Mel before and he was probably thunderstruck by her beauty. What do men usually do in that situation? They usually come up with so much crap that it’s embarrassing. That’s the impression that I got from that interview. The poor guy was trying to chat up a beautiful woman and he just did it in the wrong place.

Sure Mel was trying to conduct a serious interview, and she was obviously embarrassed by the whole thing but it’s my opinion that a true professional would have taken it in her stride and continued with the interview.

As for the media beat up, honestly guys, things must be pretty quiet out there if you need to go on about something so trivial for days on end. But then, they know there are a lot of dimwitted twits out there that soak this sort of crap up and so they’re merely giving them what they want.

As for Mel, as you can see in this interview, she just thinks that every one should just move on. She’s accepted Chris Gayle’s apology. Something the media should do. Instead they’re now going through his apology and saying that it wasn’t a true apology.

In hind sight I’m sure Chris Gayle would not have said what he did had he known it would have upset Mel. It seems obvious that he was merely having a bit of fun and didn’t think he was doing it at Mel’s expense. I’m also sure that if a male reporter was chatted up by one of our Hot Sports Babes during an interview there wouldn’t have been such a media beat up. Does that mean there’s a double standard as far as this sort of stuff goes?

Check out the video below!

What do you think would have happened if it was a bloke in the background ogling female UFC fighters?

Feel free to leave a comment if you have any opinion about the Chris Gayle Mel McLaughlin media beat up.