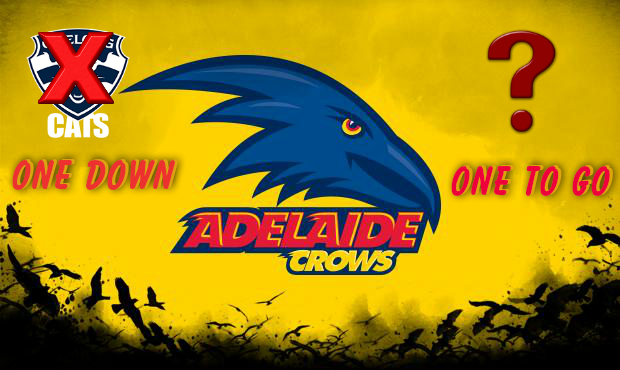 What a fantastic preliminary finals results for the Crows! All day today I’ve been listening to naysayers saying that Adelaide didn’t have a hope in hell in beating Geelong. I told them that as long as Adelaide started well in the first quarter they would win. They didn’t just win they shit all over Geelong. It was a brilliant game of footy, and how good was Charlie Cameron?

So, what was the final scores? I’m so glad you asked. :drunk:

As for the players, I have to say that Cameron really came through tonight scoring a ripper 5 goals. Jenkins came in second with four. Then there was Seeds, Walker, Lynch and Betts with two apiece. Lets not forget Crouch, Jacobs, Knight and Otten with one apiece.

But it wasn’t just the goal keepers, everybody had something to do with winning the game, including Sloane and the Crouch brothers who were phenomenal. Yep, they all had something to do with it. And wasn’t the fans unbelievably loud. I’m sure I could almost hear them over the TV, all the way over in Redwood Park. :thumb_up: I’m sure they had a hand in getting such a great result tonight. That’s why we say, We Fly As One!

Here is what Foxsports had to say about tonight’s amazing game. According to them ,”The “sealer’’ actually happened just before half-time. Geelong had controlled much of the second quarter, as Joel Selwood, Dangerfield and a revived Steven Motlop lifted, but the Cats’ efforts had seen them only reduce the margin to just under five goals.” Personally, I reckon it was a little earlier than that but it doesn’t really matter. I’m just happy they won.

Now, it all depends on who wins out of Richmond and GWS in their preliminary finals. Once we know that we know who’s in the 2017 AFL grand final.