In last weeks Bet Of The Week I placed a wager on the Adelaide Crows vs Fremantle games. Those of you who read the post know that I placed my bet on the Adelaide Crows to win. The post gave all my reasons for doing so. I knew it was a long shot, seeing as how it paid so well, but I was sure that the Crows had a good chance of winning. Looks like I was wrong and Fremantle was too good for them. If it wasn’t for their inaccuracy they would have absolutely slaughtered the Crows.

That was last week. This week we have a new Bet Of The Week. I thought because the World Cup was upon us I’d choose one of the World Cup matches as this weeks Bet Of The Week. The problem was which one to choose. As it turns out I was asked if I wanted to join a group watching the England vs Italy World Cup game. Sounded like a good idea. As you know it’s a lot more exciting watching any sport when you’re around a group of people. More so than watching it all alone.

England vs Italy World Cup – Who Will Win?

OK guys, you’ve probably worked out by now that a lot of the time I vote with my heart when placing a bet. Being of Italian decent 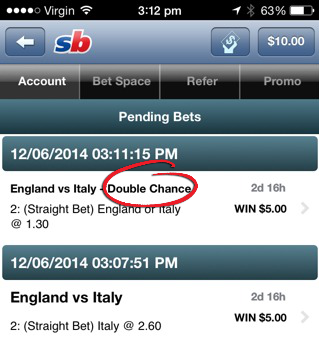 cause me to want to back Italy. That is of course unless Italy plays Australia in which case national pride overrules any blood ties. 😉

The question now is who will I use to place my bet. In the Crows Fremantle game I used bet365 so I figured this time around I’d give Sportingbet a go. Too bad I can’t take advantage of their Sportingbet $700 Free Bet Promotion

for new members. Unfortunately this offer is not available for certain states in Australia. Remind me to do a post on that later.

Of the two sports betting apps I’m currently using I find the Sportingbet app a lot easier to use. If I can find an app to record my actual movements on the iPhone I’ll do a video to show you just how easy it is to place a bet using the Sportingbet app.

OK, let’s examine the screenshot of my wages that I did manage to take. As you can see I’m sticking to my gambling budget, just like I outlined in my post about the World Cup and responsible gambling. I also placed a Double Chance sports bet. If you’re not sure what a double chance sports bet is you can read about it in my Double Chance explained post.

Sticking to my sports betting budget I split my $10 wage by placing $5 on a double chance on England or Italy to win. So I lose if the game turns out to be a draw. And a straight bet on Italy to win. So if Italy loses I’ll still manage to win something.

Are you going to place a bet on the England vs Italy World Cup game? If so which way are you going?

Getting The Best Odds