Before I begin my rant, I want to show you a little video put together on the Formula 1 bans grid girls debacle. 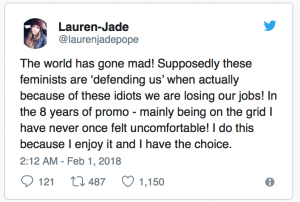 Before I give my opinion on the Formula 1 banning the grid girls I’m going to tell you why they’re doing it. It’s Sean Batch’s opinion that; “While the practice of employing grid girls has been a staple of Formula 1 Grand Prix for decades, we feel this custom does not resonate with our brand values and clearly is at odds with modern-day societal norms!”

He then goes on to say; “We don’t believe the practice is appropriate or relevant to Formula 1 and its fans, old and new, across the world.”

Honestly, Sean? You believe the fans don’t want to see the grid girls? Your Red Bull driver, Daniel Ricciardo would like them to stay!

In the article, I linked to above, “In December, BBC Sport carried out a vote on whether ‘grid girls’ should be part of Formula 1, with 60% saying that they should be.” Whatever happened to giving the majority what they want? Instead, they have to bow down to the do-gooders and feminists!

What about the grid girls themselves? I’ve posted a tweet from Lauren Jade, a now former grid girl, who thinks the world has gone bonkers!

I’m sure that a lot of the other grid girls would agree with her.

We’ve now lost sexy women in the Clipsal 500, the Formula 1 and in Professional darts. What next? The UFC, wrestling? Where will it end. Thankfully I’ve already written a post on grid girls and those lovely walk-on darts babes. At this rate, I may have to can my hot sports babes posts. :tongue_out: Just kidding, that is never going to happen. :drunk:

Honestly, what do you think of their decision?