Those of you who are my regulars know that Fortuna is our Lady Luck Of Sports. I had a char with her the other day and we decided to put her talents to the test. Starting from today we’re going to run a weekly Fortuna’s AFL Footy Tips. Too bad I didn’t think to have this chat with Fortuna earlier. Not to worry, starting on round five is better than hot having a Fortuna’s AFL Footy Tips at all. 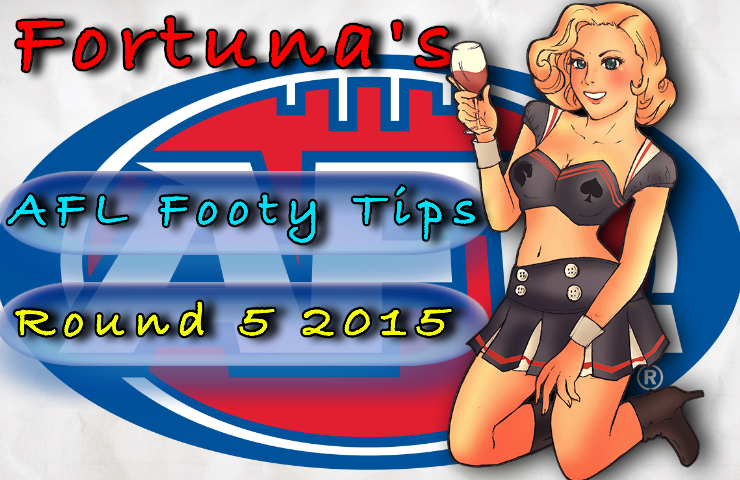 You’re probably wondering why three of the round 5 2015 AFL Footy Tips are red. It’s because no matter how much I argued with Fortuna about her picks she would not budge. Typical bloody woman.  :tongue_out:

OK, now that we have that out of the way I thought I may as well put Fortuna’s AFL Footy Tips to good use by placing a MultiBet with Sportsbet.

Placing a MultiBet with Sportsbet is so easy when using their SportsBet App. All I had to do was to tap each of the teams that I wanted to put a bet on. That put them into my Bet Slip. Once I made my selection I placed a dollar on each of the six teams I chose to back. Keeping with my responsible gambling promise of not betting more than $10 a week that left me four bucks. I clicked on the section that combined all 6 bets into a MultiBet and used the remaining $4 as my MultiBet.

The teams I backed, and their odds, for my MultiBet were;

The question now is whether or not I will use SportsBet Cash Out feature before Showdown 38  :thinkin: